Well, in case of puppy lovers, it can –for a new commercial of Pedigree definitely has created ripples in the online world, with more than a million views, which, in all probability, would entail positive publicity for the brand, which, in turn, might or might not translate into more packs being sold for Mars. Spend 2 minutes to appreciate the simplicity behind the creative:

According to Creativity Online (via Mashable) , the video was shot with a Phantom camera at 1,000 frames per second, which explains the underwater-like quality of this viral commercial. Director Bob Purman (Agency: TBWA, Toronto) explains the spot thusly: 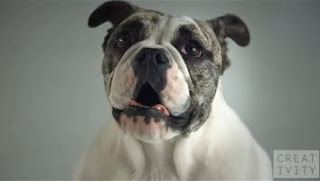 “The ‘Catch’ spot was to be a series of shots of dogs looking with anticipation as a piece of dog food is flying through the air towards them. We shot close-ups of the dogs at 1000 fps. The result was really wonderfully anthropomorphic. The super slow motion really captured this intense sense of desire in the dogs’ eyes. To me it was equal parts awe inspiring and hilarious to see so rich a palate of personality in a dog’s facial expressions…(the ad) really exploits the dynamics of the dogs’ athleticism and their emotive personality in slowed time.”
According to Lori Luechtefeld at iMedia Blogs, this ad is rated high, as it not only has Adorable pets, but also no digital effects to make it more appealing, and so is worth every penny that is invested on it.
Natural Videos of cute Pets are bound to get attention, which is why this ad has a high emotive appeal as well, considering the “viral” quotient of this ad.
But, does this mean any ad with pets will sell? Not always, says Lori. Another ad of Friskies has a cat and a lot of digital effects. However, it lacks the punch and the connect completely. Reason? The audience is pet lovers and not ‘Avatar’ lovers, and so the flavor does not go down well with the right target group. A leaf to be picked from Marketing 101, I presume!
Also, some argue that is a copy of the another ad from Vitalic and the creative team did receive some flak for copying the essence of an existing ad. However, looking at the cuteness quotient, TBWA seems to have done a far better job of getting that emotional flavor out of a lot of us! Kudos to the team for this one!