The Hungry Child, The Thirsty Child – Do we really care?

ambient marketingguerilla marketingSocial Marketing
Puru Gupta -
08:24
I have earlier talked about the problems of deprived children and the solutions that the marketing world has offered – how NGOs/ ad agencies have been brilliantly communicating their problems, adapting innovative ways and tools to connect to the social world. Be it about providing shelter to homeless children or pushing them out of begging, or fighting against Child Labor, campaigns have always managed to get a lot of attention, and possibly encouraged a lot of us to come forward and contribute in solving the issues at hand.

What such campaigns fight against is not to apprise us of the issues and communicate the problem – today, all of us are cognizant of the problems around us, the problems these deprived souls face – but to fight in breaking the barriers that we consciously setup, the shells we hide into, the walls of “conscious social ignorance” that our built around us – where we attempt to ignore and work around these social issues for our own convenience. 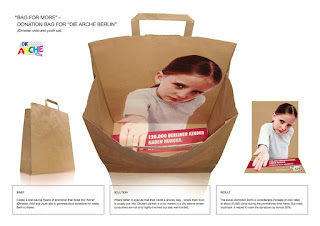 All said and done about the communication bit, what remains to be evaluated is to quantify the output of such efforts – too much and too many is always what you hear / read, but “how much and how many” always remains in the grey world. This time, however, I managed to not only get campaigns, which are directionally in the same line of thought – how to get disadvantaged children out of hunger or thirst, but also the impact such campaigns have made on the social world.
Though these campaigns are taken from different parts of the world, be it shopping carts in South Africa, or shopping bags in Germany, or Studios in Brussels, Belgium, all of them make the same point – help children grow and nurture their childhood. 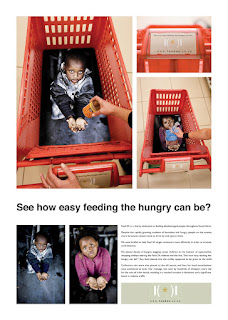 The first set of campaigns have leveraged shopping tools, including the cart and the poly bags to articulate the problem of hungry children
The campaign on shopping carts entailed placing…
..decals of hungry, begging street children at the bottem of supermarket shopping trolleys bearing the Feed SA (charity behind the mission) website and the line. “See how easy feeding the hungry can be?”. Any food placed into the trolley appeared to be given to the child. Collection tins were also placed at the till points and bins for food contributions were positioned at exits. Their message was seen by hundreds of shoppers every day for the cost of a few decals, resulting in a marked increase in donations and a significant boost in website traffic (Agency: TBWA)
[Via I believe in Advertising and Direct daily]
The other campaign picked a similar tool – the shopping bags, and put pics of begging children on them. The tagline read, “120.000 children in Berlin are suffering from hunger. Donate food” – Less strong than the previous one, but effective nonetheless. [via Ads of the world]
The next one – more of a guerilla than an ambient, from Red Cross and Studio Brussels, picked on live television as the medium to make a point, injecting a black boy to interrupt prime time live shows, who ran into the discussion / news rooms and what did he do there – drank the glass of water that was naively kept at the table – something that we conveniently ignore during our social interactions!! Point – Small things that we discount matter a lot to the poorer part of the world. “Every 15 seconds a child dies due to lack of drinkable water!!” It is part of our responsibility to help out and save these kids, ensuring atleast minimal drinkable water to them… And did it succeed in making this point – Well, on records, the campaign titled, “Thirsty Black Boy” managed to raise 3.3 million euros from the 6 days of its launch – must say, it did ring the bells (and pockets) of quite a few of the Belgian citizens!!

Read through the campaign sheet below to get more details: 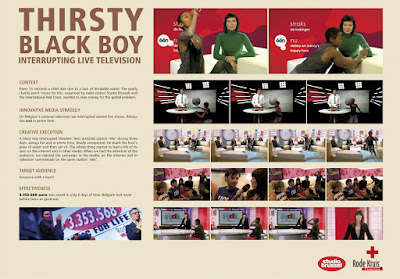 Must say, marketing is not just about talking, right? 😉
[Via Ads of the world / Motor Brigade]