Outdoor Advertising – Nothing left to Imagination!

AmbientBillboardsOutdoor
Puru Gupta -
07:38
Whenever a new medium emerges, marketers run behind it, exploiting it till the time it is coined as “common media” or till the time their infatuation with that medium is over. Look around, and you would say the same thing for newspapers, magazines, and now Billboards as well. 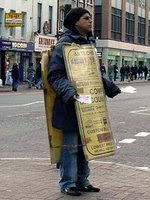 Initially, they were billboards – just plain simple billboards. An advertiser just wanted to stand next to the road. Not speak anything, but simply stand. If someone passed by, he would talk silently, without caring much if the other person listened or not.
Then slowly, more people came, and everyone wanted to stand next to the road. The bigger ones then wanted to move a step further. They shouted! Some….just went on the road itself!

And so emerged much more aggressive forms of Outdoor Advertising – ambient, guerilla, virals and so on and so forth

What is exciting about Ambients? Well, if nothing, they do grab attention. And some of them move into the viral phase as well, creating more and more attention. The takeaway? Am not sure how much recall the brand has, but the ambient for sure gets a lot of eyeballs rolling.

But what is special with Billboards? First and foremost, if creatively used, billboards offer a lot of flexibility. This flexibility, leveraged by creative innovations of advertising masterminds, is what separates the effective billboards from the dead ones you notice around you. Unfortunately, very few advertisers understand that a billboard that is seen for not more than 2-3 seconds, needs to be smartly as well as effectively used.

Having said that, there are few advertisers who have applied this flexibility of Billboards and ambients to perfection and are undoubtedly classic examples of creative excellence.

Consider, for instance, the latest creation by Duval Guillaume*, for Carlsberg. It is to advertise the new Carlsberg bottle design, and is presented in a rather unique manner, by putting the new bottles themselves! As they say – for the bottles, by the bottles! 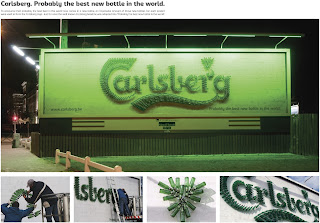 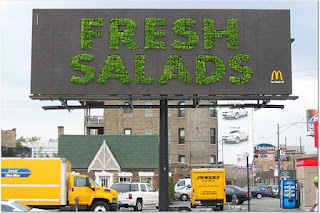 Apart from Duval’s Carlsberg, there are other creations too, that are worth mentioning. Found the links at Adrants, where Steve has linked to the previous similar outdoors highlighted at his blog – Leo Burnett’s Lettuce garden billboard for McDonalds and Ella Bache’s Peach Lady in the garden for its skincare brand.

While Leo Burnett worked on representing Freshness and greenness in the McDonald’s Fresh Salad, by putting lettuce leaves on the billboard, Ella Bache took a step further, and made an entire naked lady out of Peaches and put her in Sydney’s First Fleet Park. Have a look – 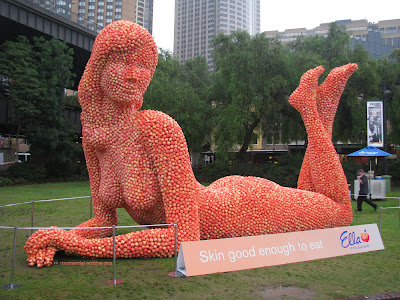 Loads of interesting points/coverage on this lady – undoubtedly, there is nothing left to imagination! Refer to the links** below for more.

Coming back to the billboard application, an interesting perspective was expressed at one of the posts on Lettuce Billboard –

“It’s unfortunate most agencies and marketers don’t realize the billboard medium is at its most powerful when it’s used for simple, direct messaging. Two to four words and a simple visual is about all the medium can take. Too many marketers and agencies try to cram the entire marketing plan onto a single 14 X 48 foot space which is usually seen for less than three seconds. For billboards, simplicity rules.”

Well said. Arguably, as billboards get simpler, the feel factor that was never even in the consideration set for billboards, is beginning to emerge, and one can not only imagine the brands, but also see/feel the advertised brands, through billboards/ambients.

And with examples such as the carlsberg bottles, the lettuce leaves and the naked lady, must say, there is little that is left to imagination!

*Duval, of Antwerp Agency, has been featured at this place before, for its Cadbury Shweppes Fountain Bottle earlier
**For more details, you could refer to the write-ups at various blogs / sites:
Lettuce Billboard, Peach Lady: Commercial Archives, Adrants and the making of the video (worth a download))
[Photo Source: Peach Lady, Carlsberg Bottles and Fresh Salad, Human Billboard]