A recent article in Adage, P&G Primes Its Pinpoint Marketing discusses how the world’s largest consumer goods marketer has plans to re-orient its marketing investments, and wants to move closer to the consumers through Relationship Marketing.

“That idea is targeted scale, a nearly oxymoronic term for the way P&G, so expert at using its enormous clout to buy vast amounts of TV time efficiently, is trying to leverage its heft in relationship marketing, whether through direct mail, online communities, or even content plays”

This concept of targeted scale entails reinforcing a relationship with its customers. Traditionally, Relationship Marketing has been the forte of service companies, specically in the banking & airlines industry. Consumer goods companies, conventionally, are not considered to be efficient in this form, primarily due to two reasons cited in the article: the scalability of the effort and the low involvement product lines. More so, mass-marketing implies small margins on the SKUs that obviate investments for individual consumers. That’s why, most of them typically prefer the mass-marketing way.

Even within the company, there has always been heavy reliance on TV advertising, and it is difficult to justify the returns one should expect by investing into targeted marketing. However, the fallacy in the argument lies in the nature of the customers which is continuously evolving, and can no longer be homogenized into demographic clusters.

The company, therefore, intends to break this clutter, by attempting to strengthen its current base. “There are roughly 107 million households in the U.S., and P&G is attempting to forge relationships with more than half of them.” Still, keeping in mind the apprehensions of the investors, the costs of this transfer would be spread initially….
Justifies Ms Lewis:

“We can use targeted scale and let the fixed costs of direct marketing — list buys, acquisition, response modeling, mail and fulfillment — be spread across 10 brands. It doesn’t work for P&G otherwise“ 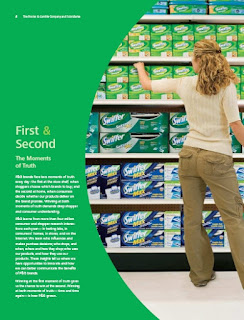 The First & Second Moments of Truth are the key words that P&G works on, for its customers. From what one can infer from the article, the effort is directed towards offering a much more targeted offering at the first moment of truth itself, so that the second moment of truth is much more effective. This implies a concerted effort in clustering customers based on usage patterns and shopping behavior at the POP.

“We learn who influences & makes purchase decisions; who shops, and when, where and how they shop; who uses our products, and how they use our products. These insights tell us where we have opportunities to innovate and how we can better communicate the benefits of P&G brands. Winning at the first moment of truth gives us the chance to win at the second. Winning at both moments of truth—time & time again—is how P&G grows“

Keeping this in mind, Segmentation has been modified to service customers using an integrated approach, and not specific to each of its brands per se. Based on usage patterns and psychographics, “cohorts” have been identified, which in turn can be used for all the brand managers. So, when a communication goes to a customer, it would go from the corporate brand, and not individual brands of P&G. Thus, there is attempt towards an inter-brand cooperation to share customer profiles, with the marketing efforts being combined and coordinated.
As mentioned by Ms Lewis,

Another Article in Adage published this month, P&G Will Boost Marketing Spending for Fiscal ’08, reiterates the focus areas for P&G in the next fiscal. With top line growth being given a priority, (even if it is at the cost of bottom line improvements) marketing would be given much more emphasis this year (starting July 1). Also, with rising raw material costs and decreasing returns, the margins for the FMCG giant are bound to shrink. Thus, marketing would shift towards non-measured media as well. Therefore, an aggressive effort would be made towards online space, in-store promotions, induce trials for customers, so as to trade-up consumers.

P&G spends close to a tenth of its total sales on advertising, which is higher than the industry average (but what matters to the company is the effectiveness and brand equity than ad-spending-to-sales ratios, as said by Mr Lafley in investor presentations). Out of this portion, roughly 70% is spent on TV advertisements and hardly 2% on Internet. But what triggered a relook at this strategy is that though TV Ad spends continue to command the largest pie of the investments, the RoI from the TV seems to be declining.

Overall, with the need of behavioral targeting, coupled with the declining returns from conventional media, P&G would move towards putting more dollar-eggs in the direct-marketing’s basket this year. What remains to be seen, however, is the returns on these investments, and to what level can the effort be scaled up, to suit its customers as well as their investors.

From a financial viewpoint, it is imperative to satisfy the investors as well. Incidentally, last year, though the goals went up, the share prices went down. With such a proposition of investing more per customer, it is bound to face some apprehensions from the investors. Therefore, the company has stated specifically the “critical success factors” in its quarterly reports. The projections made for the fiscal year and other plans, are forward looking statements, and depend on a lot of factors, for them to materialize. Though the Q3 reports mention around 13 such factors, the ones pertinent to this discussion are –

Therefore, to translate projections into results, the company is moving to re-orient its marketing efforts.

From an Indian perspective, though it is still a small market for P&G, it is a high potential one – the article doesn’t mention much, though one part mentions that RoI on TV Ads is much greater in developing countries, and therefore, this media would continue to command a major share of advertising spends. This makes complete sense for China, where it is the biggest advertiser and covers a majority share of all the CCTV Ad space, but not really sure if this IS valid for India too, since most of the companies, from what I have read, are moving towards budgeting BTL campaigns in their marketing planners, too.

I am sure as the market matures, the effort would be re-oriented accordingly, if it isn’t already… 😉