Viral Marketing
Puru Gupta -
10:51
Sometime back, I had spoken about Guerilla Marketing and basics on Viral and Ambient Marketing. Recently, I came across Webchutney, that specializes in Virals and claims to have pioneered the concept in India.

Whether it has pioneered the concept or not, it has definitely created some wonderful pieces of virals for “Make my trip“, a travel portal famous for deep discounts in travel fares. These virals for Make my trip include Chidiya Udi and Chalo Lanka. Simply amazing and funny. There are a few other campaigns also, but nothing compared to the creatives like these. As is evident, these virals were awarded the Gold and the Silver Awards at Abby 2006 for Digital Marketing Innovation! Click for the virals – Chidiya Udi and Chalo Lanka 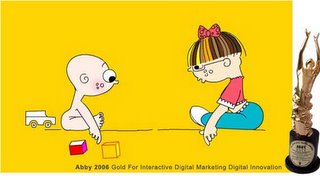 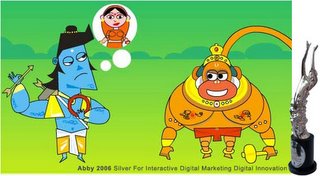 According to one of the reports on the campaign, Marketers have migrated to the web for heightened exposure and targeted audiences.

Viral Marketing, as defined, is a short-term tactics to grab attention, which may or may not translate into sales. This, according to me, is a big question mark. What is the objective of a viral? – Heightened exposure or increased sales? Agreed that the former is imperative, but does it translate into the latter? How do you measure the effectiveness of a viral? From what I read, it is based on the click-throughs and the hits – but that’s about it. Sales/conversions do not come into the picture, unless the campaign is coupled with promotions and offers.

That does not mean that one should include promotions and offers and links within the advertisements. It is important that visibility is generated first. The webchutney report mentions the same thing “As the strategy involves exchange of value, the first step is to make it worthy for your audience. Only then you can count on cheap publicity and eventual acceptance of your offering”. But there HAS to be a tracking mechanism to take this exposure right till the sales conversion part, which unfortunately, is missing in this campaign (based on my limited understanding) 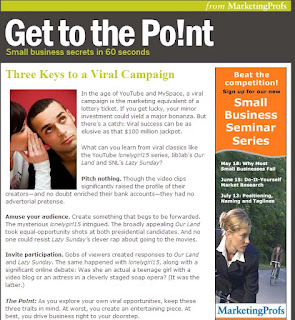 Virals are ineffective if there is no channel to spread them. What works in India’s favor is the emerging webophiles, who spend a lot of time with orkut, youtube, linkedin and gmail. This entails web-based advertising, especially targeted to the youth and the young couples. Of course, the IT sector is a big booster for this as well!

Marketing Profs, in the first edition of their modified Newsletter, “Get to the Point” have given “Three Keys to a Viral Campaign” – Pitch Nothing, Amuse your audience and Invite participation – keys essentials to either translate business into sales, or float an entertainment piece for your consumers…

Coming back to Indian scenario, Looking ahead, there would be certain bottlenecks for web-based advertising in India –