Sao Paulo (Brazil): Spread the Message… but not Outside!

Uncategorized
Puru Gupta -
12:28
Its not uncommon these days to imagine a city, which appears to be “young and hep” with an open mindset reflected in the Advertising Media, yet hosting a community grappling with high rates of maternal mortality and lack of awareness on women’s rights! When it comes to South America’s largest and most prosperous country, Brazil is no exception to this. 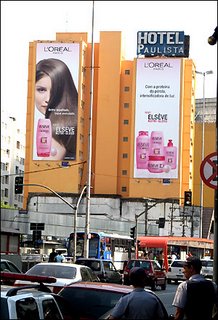 On one hand, the city government of Sao Paulo banned any public display of Billboards or Advertisements on vehicles, stating that it was an attempt to control the spread of “Visual Pollution” in the city. On the other, it is supporting a social initiative of spreading awareness on protecting women’s health and rights through media. Is there some sort of disconnect somewhere, or am I simply connecting two totally separate politically motivated moves?

Product Promotion through Billboards is a common disturbing feature for the general residents of Sao Paulo, according to the mayor, Gilberto Kassab, who coined the term “visual pollution”!

According to Adage, Outdoor Advertising in the Brazil’s biggest city of 11 million people was shut with effect from 1st of this month, with ban on the billboards, electronic signs and even fliers.

Be it information dissemination or product awareness, outdoors do tend to be useful from a marketer’s perspective. Though television dominates the advertising media, outdoor still remains to be an integral part of the campaigns in Sao Paulo, and any decision to totally block the channel is definitely going to close a lot of shops!

Mentions a New York Times story –
“They (Advertising and business groups) say that free expression will be inhibited, jobs will be lost and consumers will have less information on which to base purchasing decisions, and even that streets will be less safe at night with the loss of illumination from outdoor advertising“ 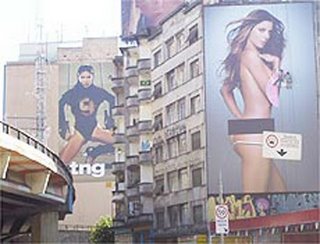 Interesting logic and valid arguments! However, when the medium is used extensively, and to an extent that it disturbs the environment, it definitely becomes a potential risk for the general public. The uninhibited nature of Sao Paulo Billboards is not a new sight for regular ad viewers.

“A remarkable number of ads feature giant images of men and women dressed only in their underwear, while the Brazilian edition of Playboy is publicised with huge posters and cut-outs of the latest centrefold models.” says a report from BBC.

Apparently, Ads in Brazil are often more daring than in other countries. Naturally, it might become “disturbing” for the susceptible men and women, by “polluting” their social environment! Adding to this is the fact that a major proportion of the billboards are illegal. Thus, both these reasons have pushed the local government to take this decision.

However, this is not where the story ends. The government has taken a step forward, and blocked other resources too. Be it restriction on the dimensions of store signs or advertising of any kind on the sides of buses and taxis, the law has probably overstepped a bit more than it legally can, so to say. Even airspace was attempted to be controlled, but due to “legal concerns”, it could not enforce the same.

Then, there is also the problem of Stereotypes in Advertising in Brazil, wherein Blacks have almost always been absent from Brazilian Advertising, primarily due to racial conflicts, and the stereotypes attached with the Black community. This would be discussed in detail in a subsequent post on “Ethnic Stereotypes and its Impact on Marketing”.

Ironically, the same country where you can find such explicit Billboards, faces roughly 1.7 million abortions every year, and teens and young women are at particularly high risk for unplanned pregnancy and unsafe abortion, with roughly 89 pregnancies per 1,000 girls aged 15–19!! Thus, there is a need and an effort taken by the Brazilian government to protect women’s health and rights. In this initiative, IPAS, an international women’s health and reproductive rights organization, has been instrumental, and is spreading awareness is various countries regarding the same.
In its campaign for newspapers and posters for IPAS Brazil, done by a Sao Paulo Agency Santa Clara, a helpline for women who’ve been the victims of sexual abuse has been launched…

According to the Art Director of the creative, Vico Benevides (as mentioned in an AdCritic Print & Design Mailer) “Most of the time, the women don’t know what to do after they’ve been through this horrible situation, and they need information on their medical and legal rights. We came up with the idea to show exactly what a woman feels after having been through this trauma. It’s that moment when you want to scream but no one hears you. The lines try to explain that even if you look OK on the outside, you may not be OK on the inside.“ 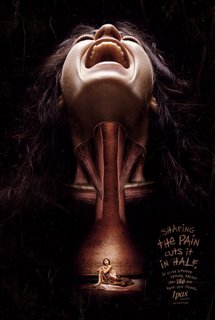 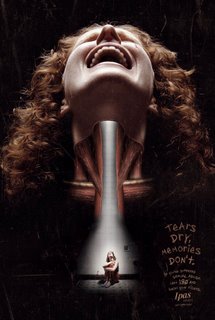 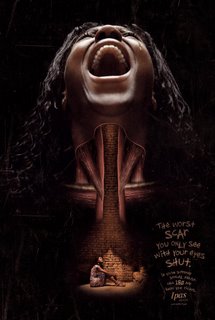 The problem is, with the outdoor media blocked and banners on vehicles or public spaced banned, the message has limited media to reach their audience. Is it justified, then, in such social causes, for the local government to stick to their rigidities, and turn a blind eye to a socially relevant message, for which the government itself is responsible? Is it logical for the government to let the thousands of women suffer at the cost of those who relish explicit and daring large sized billboards?

Maybe the government needs to be a bit more discerning in such matters, and not get blinded by their own cloud of “Visual Pollution”!!

[Source: Outdoor Pic, IPAS Campaign]
IPAS is international organization and has its presence in India too. However, as of now, I do not have any clue on their campaigning in India. Am sure since the government has partnered for the cause, it would be in the media soon. Will post an update as and when it reaches within the readable space!