Want to be a millionaire in Arizona? Simply vote!

Uncategorized
Puru Gupta -
14:09
Was browsing through New York Times, when an article struck me – a new way to get voters to vote – by offering them incentives! 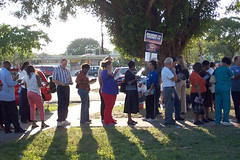 Funding would be done by the unclaimed amount of lottery winnings (around $2.7 million!). Promoting “very high odds” as the underlying theme, this sort of promotion would definitely attract attention from majority of the population, who would not mind a “free shot” at the lottery. Meanwhile, they just have to go and vote alongside!

One could argue that this is not a correct way of pulling voters, and that “socially conscious” voters do not need such financial incentives. However, there was some convincing logic provided in the article to argue on this point.

Most of the voters who do not turn up for voting are from the lower and middle income groups, thereby the socioeconomics working in favor of this concept (or could be the other way round too!). According to Mark Osterloh, as quoted in the article, the man behind the campaign, “Today, it’s the poor and minorities who vote in the lowest numbers,” he says. “The nonvoters are usually people working two or three jobs and struggling to pay the bills.”

Is such a method/initiative within the purview of the social marketers? Is this ethical and impartial?
According to me, as long as the incentives are being provided for unbiased voting, as long as the motive is simply to get people to vote, and not vote for some xyz and as long as there is a tangible change in the social habits with something to counter the indifferent helpless attitude of majority of the stakeholders, I think the initiative is absolutely pertinent and commendable. It is only when this initiative takes a biased turn that things tend to go ugly.

Can this serve as a direction for the subcontinent? Going by a typical Indian mentality (including myself), such a concept seems difficult to digest, and most would consider it incomplete, if not irrelevant. Incidentally, “financial incentives” during election time is not a new concept for most of the Indians living in the hinterland. The Problem is that all of it is oriented towards “voting for so and so candidate” and not simply voting, per se! Some of the parts are even notoriously famous for such tactics. This is where the initiative crosses the line!

This area could be explored further, with certain incentives being provided to the potential voters, which pushes them out of their comfort zones, and forces them to get over their indifferent and given-up state regarding the elections. Unless there is a concerted effort from both the marketer as well as the customer (voters, in this case), public administration would maintain its status quo – something we have been cribbing for generations now!