Uncategorized
Puru Gupta -
11:13
Could you think of resolving the sectarian divide between Hindus and Muslims during partition in India through media? Could you make people conscious of the implications of the divide and the rationality behind it?
Unfortunately, that did not happen…
Probably, the awareness levels were never there…. probably, the resources were never there… or worst, probably the will was never there.

But, if anyone believed that advertising is not a solution to religious conflicts and is ineffective, he needs to reconsider, and have a look at a small organization which is present in a small country called Lebanon, but is doing something that would make a difference to the larger part of the world.

In a country, where every faction of social structure is based on your background, where intra-group affinity and inter-group animosity seems to be rising, where reservation is present in all domains of the political, economic and legal environment, sectarianism seems to be pervasive.

This system of specific reserved rights for various indigenous groups, commonly termed as Confessionalism, is becoming detrimental to the growth of the nation. More so, considering the recent tensions among the ethnic groups with the latest being the killing of a 20-year old, it has become critical to make the locals more conscious of the implications of this divide.

A commendable attempt has been made by a voluntary organization to take this forward –
05 Amam (Al mujtamah Al madani), which is “made up of voluntary people from all religious denominations and not affiliated to any political party” 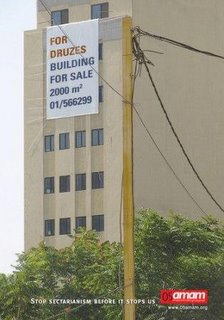 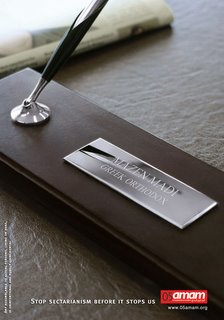 According to them, this Campaign is an Awareness campaign on sectarianism, wherein the idea is to apprise their fellow countrymen on the fallouts of the increasing divide between various ethnic groups, and how their personal biases could hamper their professional lives as well. 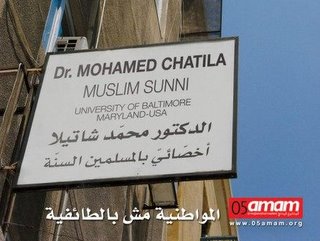 Already, 18 different recognized sects are present in the country, with little affinity for each other.

Picture this – According to a story at Chron,
“Traditionally, Lebanon’s president is Maronite, the prime minister is Sunni and the parliament speaker is Shiite. Other posts are reserved for Greek Orthodox, Greek Catholic and Druze. Even TV Channel Stations have their own sectarian bent — the Lebanese Broadcasting Corp. for Christians, Future for the Sunnis.” 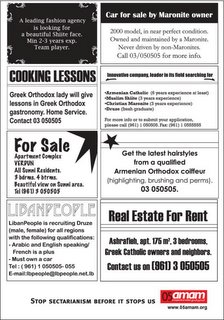 As one can notice, Sectarianism is so ingrained in their daily lives that the entire thought pattern and decision processes have an ethnic base to them, which could prove to be detrimental to their personal growth, and in turn the society as a whole.

The campaign, designed for free by Leo Burnett for Amam and doing the rounds among thousands of expatriates and many locals, mocks at this tradition and animosity by taking the divide to an illogical farcical level and explores options for the near-future – cooking lessons by Greek Orthodox, doctors treating only Muslim Sunnis or Maronites, car for sale never driven by non-maronites, phone directory categorizing names based on their religions, building for sale to Druze, hairstyling by an Armenian Catholic or a fashion agency looking for a beautiful Shiite face.!!

At the bottom, the ads read in English, “Stop sectarianism before it stops us” or, more bluntly in Arabic, “Citizenship is not sectarianism“ 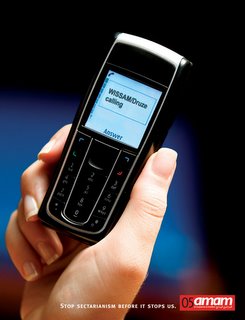 It is hard to believe if such things would realistically exist; However, the unfortunate part is that it is not completely unreal, and there is some element of reality already. This is why the advertisements force the community to look at itself.

The campaign is definitely provocative, but it might not appear satirical to some sections of the Lebanese population, as they might be able to relate to most of it. But, to a large extent, it would instigate an introspection of how deep has confessionalism penetrated into the minds of the locals.

To what level this would be effective, time would tell. For the time being, it does make the locals uncomfortable, and to my mind, that’s the first step of success of the campaign.

Kudos to the creative, and the creators!

Reference: Ad Blog Arabia – A blog I found only recently, but something which is pertinent for anyone who would like to know about the communication and marketing developments in the Middle East. Would be visiting this more now. Thank you Zeid and Ahmad!