Where’s the Consumer? There’s a Consumer!

Uncategorized
Puru Gupta -
03:38
“Then, a consumer wonders…. Is there is any place where I would not be noticed?? “

Advertisers are no longer satisfied with the media they have for Ad exposures – the traditional media is history. Outdoor media is no longer restricted to billboards and road signs. Globally, the trend is changing.
A few examples.. 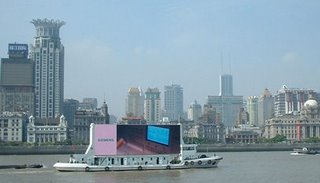 a giant ship carrying an LED advertising board patrols the Huangpu River in Shanghai.
According to a news item, “the LED board is 30 meters long and 8 meters high, more than half the size of a standard basketball court. During the sail, the board will display various ads. Currently it is mainly showing public service announcements, but the company is looking to sell time to commercial enterprises.”
The medium has got mixed reaction from the public, with shopkeepers finding the bright light uncomfortable in the evening, while tourists are awed by the scenery. However, Even though there are complaints by the troubled shopkeepers, local authorities can do little to remove the advertisements, as Mobile advertising is currently unregulated in Shanghai.
[Source: China snippets]

Just to put things in perspective, China, about to be the fifth largest ad market soon growing at an average of 7.5% annually, already has around 72,610 advertising companies, spends almost RMB 243.9 billion on advertising, and roughly RMB 20 billion on out-of-home advertising! [via 8 days magazine and Adage] 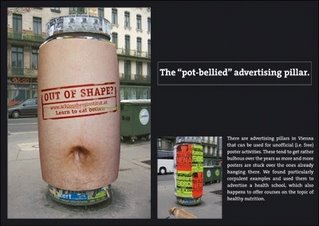 At another place…in Vienna, Austria

Advertising pillars, used for unofficial or free publicity, are being used by advertisers to advertise a health school, by projecting a pot belly shaped poster on the pillar. Consumers walking on the road would pass by the pillar and read the URL of the health school advertised.
Incidentally, from the photograph, the road seems to be on the back side. Wondering what the pillar would look like from there ;)! 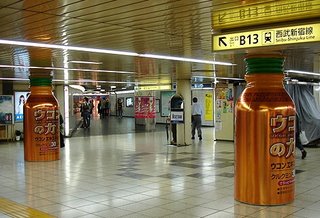 In Tokyo, Japan, train stations attract a huge media space for advertisers. Innovative methods and media are identified to advertise. So much so that there is a list of “Top 10 advertising tricks for train stations in Tokyo”

A particular case in point is the giant tea bottles put up at the station in the form of pillars. In one of the stations in Japan (Shinjuku as it says), pillars in the form of Ucon (Tumeric) Tea Bottles are put, to advertise the tea brand. 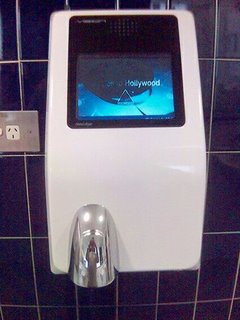 Every consumer would spend around 5-7 seconds in front of the hand dryer. Why to let that space go unaddressed? You never know he might just plan to buy another mobile during that time! 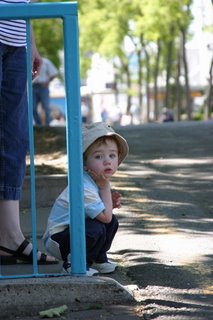 Undoubtedly, consumer-hungry advertisers around the world have left no space untouched to lure the consumer and advertise to him. Be it public transport, tourist destinations, stations or even the bathrooms, the idea is to keep the consumer engaged with advertisements.

From looking at targeting a particular segment, OOD seems to be literally hunting for a consumer! Probably, the lessons that marketers learn “capture the mind space of the consumer” was misinterpreted as “capture the consumer’s space” somewhere…

“Then, a consumer wonders…. Is there is any place where I would not be noticed?? “…