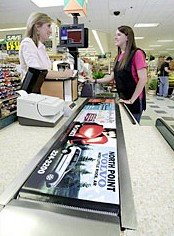 Advertising has no limits and boundaries, but of late, Advertisers have confined it to the retail stores only. Their latest target is the conveyor belts at the point-of-sale, being used as another advertising medium.

The opportunity was identified by Frank Cox, president-CEO of EnVision Marketing Group, which has patented the system to print digital, photo-quality ads directly on conveyor belts. According to him,”With a store with eight to 10 checkout lanes, you’re talking about 100 square feet of wasted ad real estate.” [Source:Adage]

Seems logical. When a limited set of consumers is being chased by an unlimited set of advertisers, each and every square foot of space inside the retail outlet is being tapped. 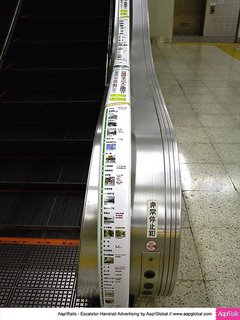 The clientele consists of Retailers ready to get the belts printed as well as brand marketers willing to tap this new medium. Currently being applied at 52 Kroger Stores and 13 Harp Food Stores in the United States, the concept is being used by local brands only. As of now, marketers of only local brands have come out to test this new media, with local real-estate agents and insurance brokers placing their ads.

Bigger brands might be apprehensive of the ROI of this medium and its application or might chip in after they have clearly understood how to usefully exploit it! Even the president of the company has not approached the bigger retailers like Wal-mart. According to him, he would ask them for space once the national brands have adopted this advertising medium for the stores!

With incentives such as “exclusivity” and “national reach”, the effort is definitely commendable. However, though the idea is unique and creative for sure, its effectiveness is debatable. 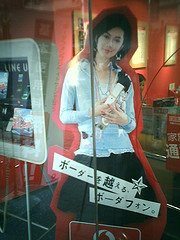 Objective of such a medium could be to ensure high recall value, trigger an impulse purchase, and in some cases, simple exposures. Personally, I believe this mode would be effective if there is a shock value attached to the ad, since normal mundane ads might not attract any attention at all. If a consumer is busy tallying her purchases, and waiting for the total amount to be announced, it is highly unlikely that she would bother to “read” the messages placed in the ad. Hence, it would be logical for advertisers to place innovative ads that have some element of “shock” value to ensure recall or trigger an impulse.

Promotions also might not work in this case, since it is pretty unlikely that a customer would go back to purchase the products under promotion, though I did read up on branded bags used by retailers, which entailed the consumers going back to buy the advertised products! Can only wait and watch in this case.

Even if the idea works, how frequent can the ads be moved and replaced? Definite limitations such as Flexibility with the Ad modifications and the frequency of change obviate seasonal promotions being advertised on the conveyor belts. Local services can be advertised, but that restricts the reusability of the conveyor belts at other locations as well. To add to that, over exposure might also irritate the consumer at some point.

Am not sure of the consumer insights here, but there is a particular advertiser insight for sure, that can be inferred from this ….. “Desperately Seeking Consumers Attention” (DSCA) is what I would attribute this to, if not desperation per se.

Steve (Adrants) critiqued the concept in one of his entries,
“If you happen to work as a grocery or retail store clerk you might find yourself checking into a hospital for dizziness or a mental institution for insanity all caused by being forced to revolving ads on the conveyor belt in front of you”.

As Steve mocks at the idea of captive audience, “Perhaps Cox should start calling hospitals to place ads on the ceilings of patient’s room”
Well said, Steve! By the way, did someone notice the floor? 😉