What’s in a Family Name? (China) 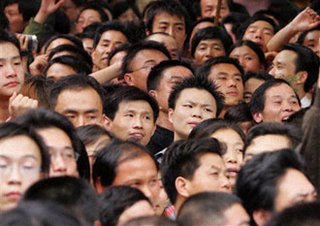 Entries have been pending for a long time now. Found some interesting things happening around the world lately, but could not post them earlier. Would be blogging them soon.

For now, its something interesting about one of most exciting markets – China.
A recent survey conducted by the Chinese Academy of Sciences published some notable facts about the Chinese Family Names in China.

According to the report* (as covered in China Daily),

Out of these, “Li” is most popular family name, with 7.4% of Chinese people bearing that name [Source – Survey released by China’s National Natural Science Foundation in January]

The most used name in China is Wang Tao, with about 100,000 people bearing the name!

What’s in it for Marketers?
Though this might not be too relevant till the point-of-sale, but looking ahead, a CRM model would need to take this factor into consideration. More so, Loyalty cards and Networks would need to have an extra variable for verification.
Photo identification might not be the best way of security checks also.
Even the Service model, including personalized services, would be different. This could specifically need special treatment in case of Insurance, Bank Accounts & Financial transactions, Private deposits and Legalities in Ownership.

Interestingly, the surname is the only Chinese element in the names of most of the Chinese today. Most of them prefer to have a Western first name, so that their first names are not spoilt.
According to Business in Asia

In China, the family name precedes the given name, which is occasionally followed by the second name or the western equivalent of a first name.

Nonetheless, I believe some innovation is required in the Chinese mindset to think of newer names 😉
Imagine even if a tenth of them reach a Starbucks, place their order and wait for their names to be called out. Would be quite an exercise!

Must say, Risk of counterfeiting in China is no longer restricted to products only ;-).

* The survey has investigated about 1,110 counties and cities covering nearly 296 million people with 4,100 surnames.