Uncategorized
Puru Gupta -
05:47
Another piece from Cannes Lions 2006 – this time in the Press Category

An insert in the “Fundraising & Appeals” category hits hard on your face through the message it communicates – the impact of Landmines on common man. What is creative about the campaign is the manner in which the message is communicated – using Ketchup as the medium to resemble blood and the sachets used to squeeze it out of the pack. 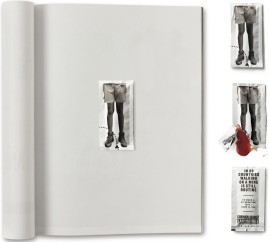 Titled “Ketchup Sachet”, the creative is in form of a sachet, which when torn, resembles blood coming out of a child’s legs. It signifies the casualties and damage caused by Landmines, thereby raising awareness about the inhuman act. Ketchup Sachets were inserted into magazines “to demonstrate the horrific everyday nature of landmine affected country“.

Created by Publicis Mojo, Auckland (New Zealand), the advertisement is part of its “campaign against Landmines” campaign (CALM). Certainly, a unique method of communication, which has resulted in the ad getting a well-deserved Gold Lion in press (Insert Medium) at Cannes Lions International Advertising Festival 2006.

The message reads “In 89 countries walking on a mine is still the routine.”

Incidentally, this is not readable from the insert. Looked up a lot of websites, where the Ad has been blogged about. Unfortunately, none of them mentioned the tagline for the insert. As usual, Martina (Adverblog) had the answer once again. Thanks Martina!

I also found an interesting discussion on the campaign at Advergirl, where the rationale behind the communication methodology is being talked about. Worth having a look!