Smart Eggs (Britain)– I’ll tell you when I get boiled up!

Uncategorized
Puru Gupta -
15:53
I had spoken about Eggvertising a couple of months back, and am back with the eggs again.
Eggs aren’t my favorite blogging topic, but when they are given much more attention than “eggs” are supposed to be given, you really cannot avoid it, can you?

It seems quite funny when you read about an entire nation admitting that it cannot boil an egg – to what degree, how much and for how long…! And yes, it is not a metaphor we are talking about….we ARE in the literal world! 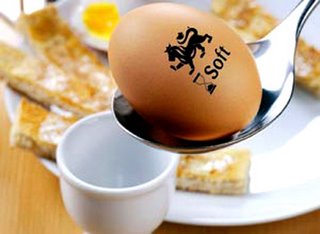 The British Egg Information Service, after repeatedly answering queries (supposedly on how much an egg should be boiled) has come up with a solution…a self-timed egg stamped with a special thermochromatic logo that becomes visible when the egg is ready.

The eggs would come in 3 varieties – Soft, medium and hard-boiled. Customers would need to buy the type they want beforehand. As mentioned in Techeblog, you have to buy the kind you want or else the ink is useless. It isn’t a three-in-one egg.

I am not sure how to react to such an initiative, but I really liked a comment made by David Ponce at Ohgizmo
“You know that mankind has reached either a new height of sophistication, or a new low of stupidity when it feels the need to manufacture food that tells it when it’s cooked.”

Innovation and technology sometimes have a funny way of reaching you. Though this seems to be a new and interesting concept, but how much it would be accepted by the markets remains to be seen. More so, if this ticks with the consumers, “eggs” are not the only products where this can be applied. You could tag the vegetables, pizzas, pulses and even meat for various indicators. Jason from Gizmodo proposes extending this logic to Steak as well. “They should really put this into other foods, like steak. Maybe they could display “WELL DONE” or “MEDIUM RARE” in big black letters when the meat reaches the right temperature.” Nice idea!

The eggs would be introduced in the supermarkets to start with, though likely only in Britain.
No Tag