McDonald’s Sundial Campaign – Breakfast Timings given by the Sun Gods.. 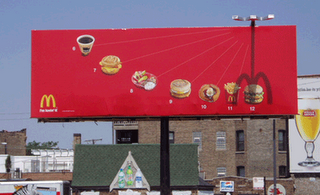 An innovative billboard designed by Leo Burnett has been put up in Wrigleyville, Chicago, as part of the Sundial Campaign.

According to Chicago Business,
The billboard has been designed with inputs of an engineer and “features a real sundial whose shadow falls on a different breakfast item each hour until noon, when the shadow of the McDonald’s arches are dead center“.

The campaign is part of the Fast Food Breakfast War in the United States, with the major players fighting to get a larger share of the significant breakfast market.

Breakfast contributes a major share in the overall Fast Food Market in the United States, hence this competition. Though McDonald’s invented breakfast in the quick service restaurant industry, it could not retain its first mover advantage for long. With new players like Starbucks (selling warm breakfast sandwiches in Chicago) and Wendy’s, competition is increasing in this market.

The Sundial concept was invented by Christian Huff, a Chicago-based electrical engineer and technical advisor to Studio One East, a Chicago graphic design business that does work for Leo Burnett. After selecting the appropriate Billboard, where the Sun hit the right angles, an aluminum set of McDonald’s arches measuring four feet by three-and-a-half feet were designed to serve as the “dial” mounted above the billboard.

The billboard will remain in place until August, after which the “Sun effect” would go down..

For now, its 6 AM and the Sun Gods have ordered for Black Coffee!! 🙂 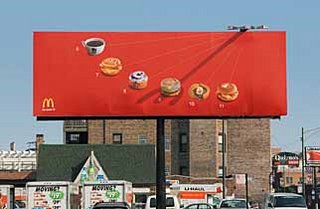 Another coverage by Adcritic in their weekly newsletter discusses the campaign from the creator’s perspective.

According to the engineer Christian Huff, who is behind the designing of the sundial, not only is the sundial the only abbreviated sundial he has seen, but he accepted that the billboard has a limited life span. “As summer ends, the movement of the sun will shorten the shadow — unless the ‘shadow mast’ is realigned” as quoted in the article.