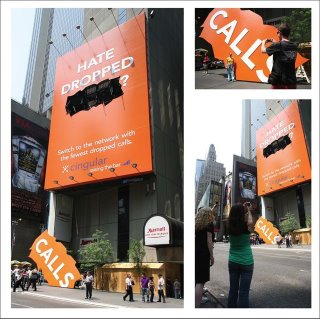 A creative concept by BBDO for Cingular symbolizes the “dropped calls” irritant and claims that the Network ensures the “fewest dropped calls” in the United States.
Nicely executed campaign!
[via Advergirl]

This campaign was launched nationwide in the US in April, at a time when most of the other Mobile Operators were claiming similar service levels –
Alltel claimed to have the “largest” network, Verizon “the most reliable,” Sprint “the most powerful,” and Cingular “the fewest dropped calls.” Thus, mutual legal battles were a natural outcome.

But things aren’t so appealing, when it comes to “evaluating” or “measuring” the effectiveness of this campaign.

According to Boston Globe, the company is offering little backup for its claim and runs counter to other studies and the advertising of competitors. Thus, credibility of the campaign is at stake!
Although a small research company, Telephia Corp of San Francisco, is behind the claim, it has not even supplied relative figures for comparison.

Another article, which was published in Brandweek almost a week back, mentions about the lawsuits filed by some New York customers as well, against Cingular claiming that it failed to provide them with adequate service.

However, the company spokesperson asserted that the company would continue to stand by the claim and substantiated it with another decision by the National Advertising Division of the Better Business Review Board that determined that the company had the right to promote itself as having “More bars in more places.” [Source: Brandweek]

Thus, there is still some ambiguity over the “truthfulness” of the campaign, which might prove to be destructive, if not handled effectively.

All said and done, from an advertiser’s perspective, the creative is simply fantastic. Kudos to BBDO for another special piece!
No Tag