Uncategorized
Puru Gupta -
18:35
National Monuments acting as Brand Ambassadors? Well, if Advertising is not headed there, at least the advertisers are..
It is a lucrative deal to get one President to endorse your brand. But when you have four American Presidents do it for you, that’s a proposal very few would like to leave at the table. Imagine if they are George Washington, Thomas Jefferson, Teddy Roosevelt and Abraham Lincoln… 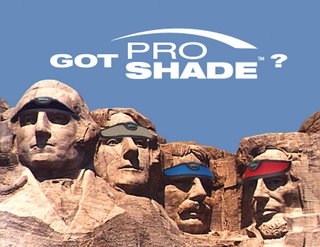 Probably, this is what lured Proshade, a 3-year-old consumer eyewear accessories company, to offer to pay up to $4 million to adorn each of the 4 President faces on the Mount Rushmore National Monument with huge Proshade visors.
According to a recent article in Adage,the authorities have denied any commercial aspect being attached to Mount Rushmore considered to be the ‘Icon of America‘!

However, the President of Proshade, Richard Lawrence has a different perspective to offer. He asserts that the initiative has both philanthropic as well as commercial implications. Alluding to preservation of precious national assets, he views his proposal as a public-private partnership which entail mutually beneficial results.
The news updates on the company’s website mention “The partnership would provide funds and increase awareness for sun protection and minimizing glare.”
To add to this, the Proshade President mentioned in another interview “We tend to look at the Proshade as something that enhances someone’s appeal, so we don’t really think of it as a defacement”

Evidently, the initiative would have ensured high visibility for Proshade, which is where the roots of the underlying objectives lie. But philanthropic initiatives do not necessarily need to be clubbed with a commercial aspect to ensure visibility..

Almost a year back, a German manufacturer had cleaned the monument free of charge, the first time it was cleaned on a large scale, an initiative taken to prevent the monument from “bio-corrosion”! The initiative entailed washing the granite faces of Mount Rushmore to remove decades of dirt, grime and lichens that could damage the complexion of the four presidents. [reference]

Undoubtedly, Mount Rushmore is very popular with advertisers. Adage mentions that there have been “around a dozen ultimately unsuccessful offers each year for the famous landmark, including one two years ago from a magician who wanted to make the monument disappear”! That would have been interesting.. 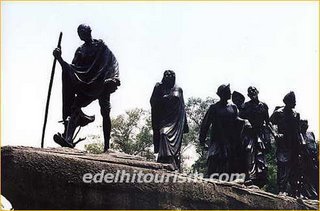 I am sure Indian advertisers would be wondering if a section of this thought process can be translated in the Indian context as well. How do we start? Branding for Footwear for our Freedom fighters or Summer Apparel for the Indian leaders for maintenance of the monuments?

Food for thought!
For now, it is “Rush more” time for Advertisers at Mount Rushmore…