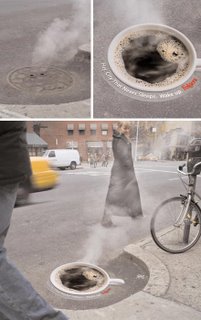 Folger’s coffee has another medium of advertising in New York City – Manholes!
Printed on Vinyl and steam coming out of it, the tagline reads “Hey the City never Sleeps. Wake up”
[via Coloribus]

A nice comment was given by David Kiley in “Brand New Day” blog of Businessweek.
He has commented on the display with a realistic perspective of the “manhole cover” – though the picture hits the taste buds sensing a hot cup of steaming soothing coffee, due to the place it is put, the steam is nothing but the odor coming out of the manhole! So that’s the “other” side of Advertising!

Talk of Manholes and talk of New York, and a dozen Exporters will be alerted here in India. Most of us might not know this (neither did I, till I read about it) that India is now the world leader in the manufacturing and exporting of manhole covers.

According to an article in Indiatime, all of the new 600,000 odd manhole covers in New York come from the low-cost Indian market. Reasons? (Source:Yahoo News) With the cost almost a third of that in the US, Indian manufacturers have started getting a major chunk of the “Manhole manufacturing” business. So much so that Manhole cover export to US is spoken in terms of another element of “Indian outsourcing” (by Jim Coyer) 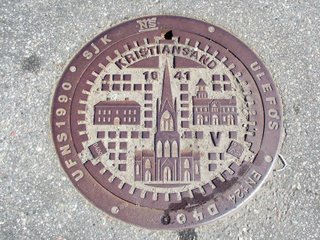 Manhole covers have long been given a lot of importance and admiration due to the artistic styles and intricate designs on them. Most of the early ones are as early as the 18th century, some of which have been collected and presented pretty nicely by individuals. Have a look. Looks more like an ancient coin collection – Each one of them is unique and elegant in their own way. Some of the samples taken from a unique collection are shown here! 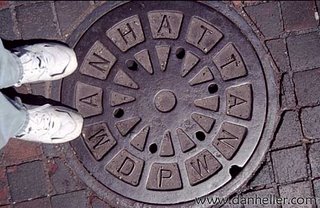 New York has something with the manholes, be it Manhole advertising, Manhole Covers, Manhole Tables, Manhole Lamps, Manhole Designing and recently, a Manhole seminar! (“The World Forum on Manhole Covers” involving artists and experts to discuss manhole covers in New York) 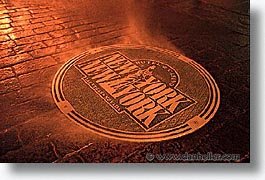 Of late, Manhole covers are being translated into tables and lamps. According to a recent article in Voice of America, Michael Miller (tables) and Michele Brody (lamps) are the key people behind these innovative initiatives. And guess what – these designs are being used in a public works project to commemorate some of New York City’s history (there comes the place again!)

Back to the sub-continent, talk of Manholes and not talk of Manhole Theft?
In Manhole cover theft has become a serious problem in many countries, especially India and China, with expenses incurred by the local municipalities and danger to the residents. The main purpose being resale as scrap, manhole covers have become endangered withing the India–China region, so to say. In China in 2005, almost 4000 manhole covers were stolen and resold as scrap metal. The hazardous implications has forced the authorities to take stricter measures and look at non-recyclable and non-metallic materials.

Finally, did you know that “Manhole” term is now regarded as a “sexist” term in some areas? According to Wikipedia,

In some areas the term “manhole” is now regarded as a sexist term, especially now that woman are increasingly working in the utility sector, and using the devices. The term “maintenance cover” is used by some cities, as a nonsexist term and to correspond to the traditional abbreviation “MH” on old engineering diagrams.

Interesting. I wonder what are the women going to say for the “Man-made devices” now? 😉