Social Marketing in Liberia – Voice of a Nation.. 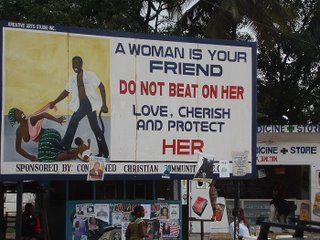 Thanks to a tip from Ilya Vedrashko at Billboard, I found a whole new dimension of Marketing – a tool that acts as a voice of a community – a voice that has the power to move a nation – power to change the perspective of a society.

Billboards in Liberia are being used to convey messages to the tortured, abused and hurt sections of the society, who have so far stayed quiet and numb under pressure and fear from the stronger sex. Be it messages on respect for women, sexual abuse or mob violence, billboards have become essential elements of trauma therapy throughout Monrovia.
One such billboard talks about Women being a friend and not to beat her.

Another one talks about using Condoms for Safer sex – a trend which is virtually absent in the country with men averse to use them at all.

You would snub this saying that this is a common site throughout the world. How is this different in Liberia? What has happened in Liberia that makes these messages “that” important?

Most of us, too engrossed in our own lives, are not even aware of the state of affairs in the war-effected regions of Africa. I myself was not aware of the intensity of torture that has taken place in Liberia. Read this piece to get some insights into the condition of the nation 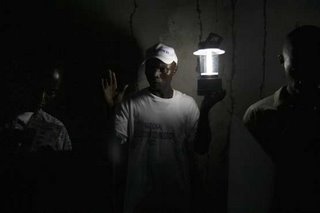 Can you imagine a country without the basic neccessities of water and electricity for more than 14 years?? Liberia is one. The water pipes are decaying and water is taken on rickshaws in cans and given to people. Electricity is only available to the upper class through generators, and the city gets dark by evening. Normal lamps are available, if at all, to select few. To add to this, the ever increasing sexual violence which continues even today!

A strong perspective, given by Jestina Doe-Anderson, a Liberian residing in the US, talks about the culture of Liberia and the way women are enticed to engage in transacional sex to fund their family’s need for survival. This abuse has even extended to Education and normal work life for most of the young women in the country.
Thus, there is a pressing need to build institutions to reinforce respect for women, and her position in the society. It is imperative to equip her with the requisite skills and confidence level, that obviate the “terrible” means of living that she undertakes currently!

Similar thoughts were expressed by Eric from Monrovia during his stay in Liberia, who reiterates the need for “rebuilding infrastructure and caring for those who hid as their country slid into chaos. After 15 years of neglect, the people of Liberia are in great need of assistance.” He talked about another Billboard – that shows a menacing crowd gathering around an unfortunate man. At the top, it reads ‘Stop mob violence now. Call 911 for help.’

A beautifully written article by Rebecca Singer, a member of “Doctors without Borders” highlights the conditions of the traumatized women in the country.

She wrote that even after the war was over, sexual violence continues to affect Liberians. It is now estimated that 40 percent or more of women and girls in Liberia have experienced some form of sexual violence with daily cases being reported to her. 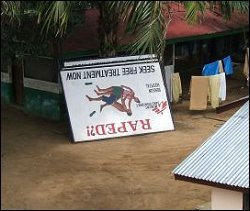 The links in this post give a detailed account of some of the horrific and painful acts of violence and the terrible experiences the women of Liberia have gone through.
But things are improving and message is being passed.. Awareness is increasing and conscious citizens would realize soon that if the economy has to improve, if the nation has to rise from the dumps, the orientation has to change – MSF (doctors without borders) have posted three billboards with an image of a man assaulting a woman. The written message is blunt, it reads, “Raped? Seek Free Treatment Now.” Though slightly strong, it conveys the message intended.

It is to this cause that awareness billboards have been put up in Monrovia. Billboards are used as instruments to spread the word – In such cases, one realizes the importance of such instruments – not to expose a brand or attract attention by putting hot celebrities, but simply to save an entire community from being tortured and abused – a message to respect the opposite sex, a message to save a nation. It is at this point that I believe that there is a different meaning attached to Marketing as well – a whole new world derived from this small, but critical element in it having significant impact on the society!