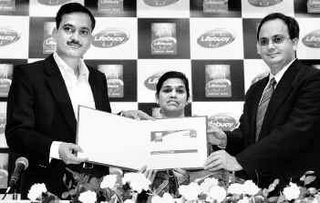 It was the first time that an Indian Brand had been featured on a postal cover, and the fact that the Indian government has recognized the efforts of HLL in health and hygiene in such a manner reinforces the strong Brand Association of Lifebuoy with Health!
According to Business Line, the postal cover has been released to recognise Lifebuoy’s pioneering rural health and hygiene education initiative, Lifebuoy Swasthya Chetna
The ED of HLL, Nitin Paranjpe asserted that “Lifebuoy is the one brand that wants to start that one movement that will change the world”. To a certain extent, an orientation has already been made to this effect. Said Ms Noorjehan – “I congratulate Lifebuoy and Hindustan Lever for initiating and assiduously implementing this socially beneficial movement”. That’s a perfect Brand Endorsement right from the centre!

A major part of the credit goes to the Global Branding of Lifebuoy. It is not only in India, but across the globe that Lifebuoy is associated with Health and Hygiene. Right from the time it was launched (in 1894), it has been marketed on the Health Plank itself.

Picture some of these old Ads of Lifebuoy featured on eBay UK – right from the time of the World War, Lifebuoy links itself to health and hygiene.

This is also not the first time that the postal deparment of a country is recognizing Lifebuoy’s Effort. A stamp had been released in New Zealand some time back, which I found from eBay again 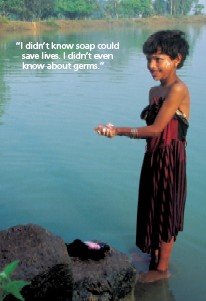 The theme of the campaign is based on the serious implications of laxity in Health Care, like Diarrhoea. In India a child succumbs to diarrhoea every 30 seconds. This results in almost 3 million deaths a year! However, a report by WHO showed that simple handwashing with soap and water can reduce diarrhoeal diseases by up to 48%. This was leverage by Hindustan Lever to develop the campaign.
To add to this, health care in Rural India is given importance due to its direct impact on labor productivity, and in turn, loss of income. Also, for decades, Lifebuoy has been synonymous with soap in rural India. All these factors led to “Swasthya Chetna”!

According to a Press Release on Lifebuoy in 2002, HLL announced the launch of LIFEBUOY SWASTHYA CHETNA on 9th May, the first single largest rural health and hygiene educational program. The objective? To develop a sustainable model to educate and apprise rural customers in 15000 village in 8 states across India, about maintaining good health through practice of basic hygienic habits including the handwash habit. It aimed at changing the underlying behavior and attitude of the villagers, which was a definite challenge indeed.

But what was the exact plan of action?
In a nutshell, the campaign was divided was a multistage initiative.
[Reference: Unilever Report] After seeking permission from village elders, the Swasthya Chetna teams, consisting of a health development officer and an assistant, visit village schools to teach children about germs and the importance of handwashing with soap through various tools (flip chart/glow-germ demonstration/quizzes) and orienting them to become influencers in the community.
“Children are invited to take part in a ‘glowgerm’ demonstration. This involves applying a white powder to the palms of hands, then washing with water only. Hands are then held under an ultra-violet light and the powder glows where dirt remains, showing that handwashing without soap is not enough. The children then repeat the process, this time using soap, only to discover the UV light shows no trace of the powder” – a simple but highly effective demonstration.

This message was reinforced through subsequent contacts, “thus preparing the community to sustain and internalize the messages.”
Subsequently, in coordination with the village children, the Health officer interacts with the parents and expose them to the impact of health and hygiene in their community. 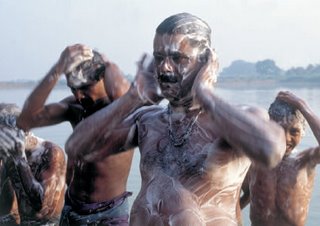 This was done to ensure that the model is sustainable, which involved self initiative and ownership from the community itself, wherein the officer was simply a facilitator and onus of improvement was not on the officer per se, but on the community as a whole. The process culminated into recruitment of children and parents as volunteers to start up health clubs that, in turn, organize events such as community bathing at the pond villagers use for washing.
The whole process, from initial contact to self-managed health club, takes two to three years.

Low Price Points: To help people on low incomes afford to buy soap, an 18 gram bar of lifebuoy soap was introduced – enough for one person to wash their hands once a day for 10 weeks.

Impact of this initiative? It started with 8 Indian states, and covered more than 70 million people by the end of 2004! This campaign was well received by the media as well as the government, the effects of which are evident as above!
In 2003-4 sales of Lifebuoy grew by 20%, with particularly strong sales in the eight states where the programme operates. This model is also being replicated in other countries like Bangladesh, where close to 3100 villages have already been visited. Such events surely reflect the successful Marketing of the brand in the subcontinent. Need I say more?

But is this simply a CSR initiative by the multinational? According to the report by Unilever, “Swasthya Chetna is not about philanthropy. It’s a marketing programme with social benefits. We recognize that the health of our business is totally interconnected with the health of the communities we serve and if we are to grow sales of our brand, we have to increase the number of people who use soap”.
As long as it has a long-term perspective to it, overcoming the behavioral aspect of Rural Consumers is a daunting task, especially in the Interiors – something that HLL has done it in a confident style so far!
Kudos to the initiative. A well deserved recognition indeed.

Incidentally, I found some really interesting facts about the Brand –