Uncategorized
Puru Gupta -
19:04
Though this article is done with its round of Blog-attention almost 2 months back, I could not resist myself in putting it up here too.

By tapping a very specific attribute of Consumer Behavior, a company has invented a whole new concept of Advertising for Marketers and Convenience for Consumers.

Attribute? Consumers’ apprehensions and their scrutinizing of the Eggs pre-purchase, entailing time engagement with the eggs; This results in high visibility of the eggs, which can be considered to be a marketable touch point and hence, can be leveraged to advertise!
Well, in simple terms, eggs are to be used as another Advertising Medium – How? When? Why?Where? .. are still not formalized, since there is not much of a mature market for it yet. But yes, what is appreciable is the ideation, innovative thinking and workability of the entire concept. 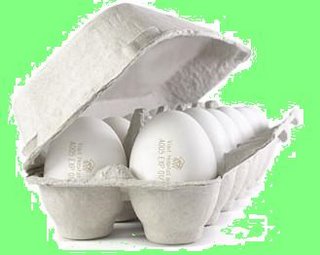 Encouraged by a huge market of 50 billion eggs sales per year in USA, Bred Parker, the creator of EggFusion and the brains behind the creation came up with this new concept of printing the expiry date and a traceability code as part of the traceability management system. Along with these details for the consumer, also comes an opportunity for companies to become visible to the consumer, thereby opening a whole new avenue for the marketers.

Taking advantage of the fact that the eggs attract high visibility and the time spent per egg is more since the consumer checks the eggs properly has encouraged EggFusion to promote Eggs as a media vehicle. Thus, emerged the concept of “Eggvertising”!

With so much cluttering in the Advertising world and uncountable touch points for the consumers, how does “Eggvertising” position itself as a unique profitable proposition?
If one closely follows the entire life cycle of the product, there are specific attributes of this media vehicle:

Thus, there is a gamut of advertisers who would be willing to invest in such an opportunity, commonly referred to as “Eggvertising”!

What pushed the creative of eggfusion?
According to a report in Fox News, Ninety-nine percent of eggs are never touched by humans.
This alludes to the fact that a large proportion of eggs is wasted, and some streamlining of the production process and in turn, the supply chain is imperative. Eggfusion considered this point and introduced a laser-etching technology that placed tamperproof marks directly into the eggshell as it passed through the packaging process.

Lessons for the Indian sub-continent

Though this might not be the best time to talk about “Poultry” and “Eggs” with the entire continent gripped with the dangerous Bird-Flu, on second thoughts, I believe this in an opportune time for the producers and the marketers to reinforce the quality of their produce and garner trust of the consumers.
A streamlined production process, with certified production and expiration dates is something that every Indian consumer would look forward to. Though this does not obviate the apprehensions of the consumer, a visible effort by the manufacturer is definitely creditable.

Thus, requirements would be close to 180 billion eggs in 2010, in contrast with the estimated production of only 46.2 billion eggs. Thus, there is a huge business opportunity in this market, waiting to be tapped (For more details, please refer to the report).

FAO recommends a vertical integration of the entire production process and sustainable infrastructure to meet the increasing demand in India.

“It needs to be supported by providing infrastructure for meat processing, packaging, preservation and marketing with value addition of products and maintaining a cold chain till the product reaches the consumer.”

Since there is a need to improve processing, preservation and marketing of eggs and poultry products, what better time could it be than to invite EggFusion to incorporate its ideas with Indian manufacturers?

Looking ahead, as this media vehicle takes shape, there is scope for a lot of innovation in this line

Many more ideas can be pumped into this, post-conceptualization.

A major bottleneck in this initiative is the Indian culture and the eating habits. A vast majority of the Indian population is strict vegetarian and do not eat eggs. How to change this habit and how to convince people to become egg-itarians triggers a completely different debate altogether!

As of now, let me stick to the ideation per se and not the execution.
Kudos to this egg-static idea! Definitely, a great example of out-of-the-box thinking, or should it be called …out-of-the-shell thinking? 😉