Uncategorized
Puru Gupta -
18:53
A small portion of the glocal strategies used by Nike the world over: 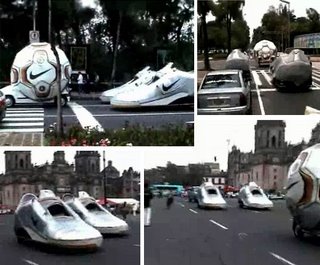 In Mexico, Nike strongly associates with the National Sports of the country – Soccer. The endorsers are the local players and Advertising is centered on Soccer itself. Here is a sample of an ambient lately carried out in Mexico. Advertising taken to the streets, literally! [Source: Coloribus] Even this campaign piggybacks on showing associating the soccer ball with Nike Shoes!

On the other hand, the latest Ad campaign by Nike (under its new Ad agency Wieden & Kennedy) focuses on the youth and has decided not to rope in celebrities in the market as such.

Reasons?
A detailed analysis of the Market Research carried out has been described at Adage China, wherein wonderful insights into the Chinese consumer have been provided.

Baseline – Inviting young Chinese who have overcome obstacles to play sports such as basketball, skateboarding and cycling, to bring to life its “Just Do It” tagline. There are already quite a number of contributors, with a few videos streaming at their Chinese website. Nike estimates the contributions to go up to hundreds of thousands eventually! 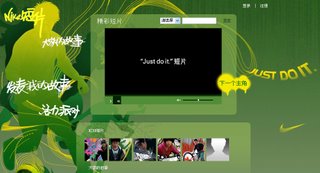 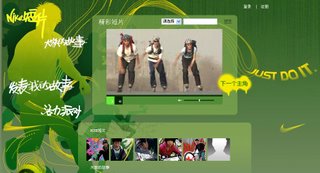 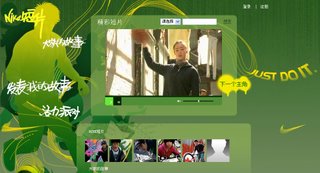 But what prompted Nike to change this face of communication?

Failure of Earlier Campaigns
Nike ad campaigns in China started in the same manner as it is in Mexico today – the local hero style. But it backfired since Chinese sports fans idealized NBA superstars for Basketball and not their own local athlete.
Subsequently, they involved American basketball stars, which was not successful on a few counts as well. Their Local culture, heritage and values came in the way (Reference: Chamber of Fear – LeBron vs. Kung Fu master) . This led the Ad agency to work out in some other direction to woo the newly found consumers…the youths!

Next Generation – Young Chinese
The young generation associates itself as a different cult and has its own aspiration levels, which is a combination of their learnings from the West and the evolution of the Chinese mindset. This new generation is more internet-savvy, and has a much higher aspiration value. They do not like to be perceived as “emulative” but “original” and “generative” would be more pertinent.
Thus, as this generation gains momentum, Nike wants to partner with them in this movement, and has therefore taken the required ‘collaborative’ measures, by communicating Nike as a forum for expression and not as a sales-focused giant!

Advertising Medium – Information Age
The campaign also entails an interactive medium for Nike to get direct consumer insights, and greater involvement of the Chinese consumers. According to the statistics provided in the article,
There are a total of 110 million web users in China, out of which 70% are under 30, and the growing power of blogs in that market as a mechanism for self-expression.

Thus, these factors combined together have resulted in a campaign largely focused on the young generation – Aged between 15-30 located in Tier 1 (Shanghai, Guangzhou and Beijing) and Tier 2 cities in China.

But does this mean that Nike has covered its China market well?
Though it mostly caters to the premium segment, it has managed to tap the mid-tier segment in almost all its bases/locations the world over! However, Local competition still inhibits the global sports giant in the Chinese Markets. Income level of a Chinese consumer is still lower than his Western counterpart. However, the shoes cost the same $100. As opposed to this, the price of its local rival Li Ning is almost half of the prices quoted. Thus, competition is still an issue.

According to an article in IHT, “Selling in China? Which one is it?”,
“Industry analysts note that Nike and Adidas dominate sporting brands in China’s Tier 1 and Tier 2 cities but that a local brand, Li Ning, is stronger in the smaller cities. Aiming at those customers often requires subtle advertising that takes into account the lower disposable income of the smaller urban areas without appearing cheap or condescending.”

Nonetheless, a nice example of customizing to local tastes by the sports leader!

From a Marketer’s perspective, the demographics and the psychological orientation is similar to the current Indian demographics – growing younger generation, with high awareness level and self-confidence. Nike faces the same competition from local Indian players and other multinationals. But, as far as the premium segment is concerned, I believe there are already a lot of takers for the super brand, obviaiting any kind of fears from the local players!

Incidentally, this communication strategy of “involvement and association” with the younger generation has still not reached India till now in the sports business! Insurance and few consumer products have already capitalized on this orientation, and are tapping the youth at places where they behave as influencers. Even at services where their role is the Decider, like the 2-wheeler segment, a whole new communication and branding has emerged, with complete focus on Experiential Marketing. Thus, Sports and accesories could also move on from Sports celebrities to the target audience itself, atleast for a short period of time, to enhance their involvement with the product, and in turn, the brand! Probably, they could move towards the Dove line or Nike line soon enough…or maybe, W&K needs to come down to India and give some tips to our agencies ;-)!