A new advergame has been launched for First Defence, a nasal spray that fights colds at the early signs. Taking cues from the old classic spaceship/detroyer game, the game has been conceptualized on the basic characteristics of the nasal spray from Vicks.

Every element in this game has been well thought of, and excellently executed. Be it First Defence Bonuses or killing of the germ-looking enemies by trapping them in the microgel, the game is one of the best pieces of creativity I have seen.

The basic concept makes you run through your diary with the Annual planner mentioned. Keep on moving forward as the days pass by. In between there would be times, when the germs and viruses would attack you and try and spoil your days. This is when First Defence ship will come in and shoot and kill those viruses! Some of the days, which are very special to you, are attacked by enemies, which you need to save. Shoot all the enemies on that particular day with your “First Defence microgel Spray” and save the day. If you can’t, your day is “ruined”.

It is definitely an addictive one, especially if you are the one who liked spaceship! Give it a shot once. I reached July 2006 with a score of 23570 (Global Rank 380). 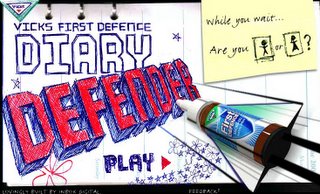 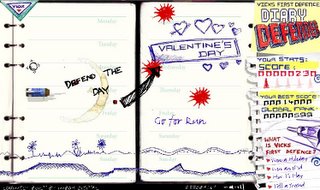 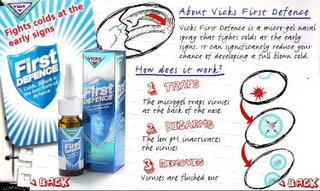 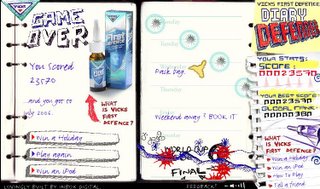 Created by Inbox digital, the game has been designed keeping in mind the primary target segment – young kids and teenagers. With designs in the form of casual writing and crayoned figures, the games would comfortably connect with the consumers.

Kudos to the campaign, Brilliant execution – from thought to finish!

Upon reflection, why are so many companies investing in Games as the advertising medium? How effective is this medium in terms of generating sales? By launching an advergame like First Defence, would it have any effect on my sales? Would an investment in Advergame obviate investments in other media? Do I need to extend this concept to must-have online promotion campaigns also?

These are some of the questions any marketer who is new to this field would ask (like me). The fact of the matter is that there is still scope for more. There are loads of concepts which need to be built over this, and a host of services which can act as extensions to Adver-games, as they are called (Games used as an advertising medium).

The primary reason for picking “Games” is the nature of their function. Online games are high involvement, emotive and have a strong viral potential. Any game that has been well-designed will attract a number of players. These players would have a high involvement with the game, and in turn, the brand. The high involvement would subsequently entail a high brand recall, along with a strong WOM potential for itself. Primarily, advergames engage the players for a longer duration of time, are interactive, and provide entertainment along with promotions (jargonize this recipe and you would get “promotainment”!).

So far, based on my limited experience and reading, adver-games are probably the fastest to generate WOM and capture attention. Compare this with its nearest competitive media for WOM – print campaigns and you would realize that games have a distinct advantage of – sustained involvement, which the print campaigns do not enjoy (they have their own strength of the “Awe” factor)!

Though advergames do hold good potential of promoting the brands, there is a risk that the promoters run in terms of execution. If the games are not designed well (navigation, clarity, competitive, interactive), the initiative, like any other one, would backfire and could possibly even lower the brand equity!

In India, this concept is still in a very nascent stage, and there are limited number of players who have ventured into this aspect of advertising. Most of the limited initiatives have been taken in mobile advergaming, and are based on bollywood movies itself. Maybe, as is true for most of the other cases, they are just waiting for the industry to get slightly maturer!

But, I will talk about this concept sometime later. Do not want information overload in one single entry!