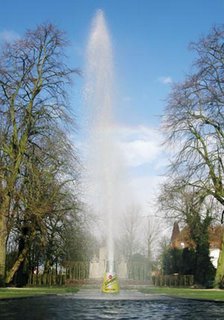 An innovative method of outdoor Advertising in Europe by Schweppes – placing Schweppes bottles in lakes and fountains.
Created by Duval Guillaume’s Antwerp, the campaign would include fountains across European countries placing Schweppes Bottles “illustrating the product’s sparkling effervescence”

Since Europe is well known for its scenic features, such a campaign would definitely get high visibility. More so, the popularity of the “Indian Tonic” brand reflects in its sales in Europe. According to the official website, Schweppes sells enough soft drinks in Europe to fill over 4,000 average sized swimming pools every year!

Great idea for a transparent carbonated drink for sure. An idea to chew on definitely….
[via Adrants and Adverblog] 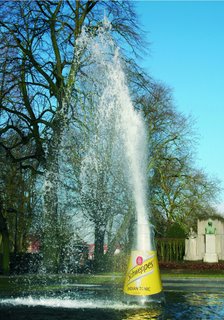 I specially wanted to mention this, since the inventor of Schweppes, Jacob Schweppe, is considered to be the father of the modern carbonated soft drinks industry. According to the website, He was the first to produce carbonated mineral water on a commercial scale
The Indian Tonic water is one of the most well known flavors of Schweppes out of its product line of over 50 flavors.

How did it get its ‘Indian’ name? According to the fact sheet on the website, British people in India used to take quinine, as a preventative for malaria, in the form of a drink with flavours and often spirits, including gin. They came to like the combination and continued to drink the beverage on their return to England. The drink’s association with India remained and became known as Indian Tonic Water in many countries.

Another feature of the brand which makes it so popular is the shape of the bottles.

The “egg-shaped” shape of the bottles was a recent change brought about almost 2 years back. This bottling was so well received that it won the manufacturer the Shine Awards in 2003 for its egg-shaped bottles!

Application? I think this idea can be very well built upon in India as well, with so many artificial waterfalls and open outlet pipes . If nothing, they could definitely do some social good to the society.. just simple loud thinking!