Uncategorized
Puru Gupta -
01:36
If you think Rural Markets is all about painted buffaloes and uninformed and uneducated farmers, think again. Read this article and you could ask this again to yourself … :-).

Before I move further, Mandis are large agricultural produce markets that trade grains, fruits, vegetables and the rest of the produce with the farmers and act as intermediaries between the industry and the farmers. They act as a central hub and a router between farms to towns.

Almost 6 months back, Business World, in its 30th May’05 article Taking reform to the farm, mentioned that alternative mechanisms for connecting farmers to the markets was required. The 7,000-strong mandi system needed to be modified for its efficiency, lack of a robust supply chain network and process streamlining. Quoted from the editorial –

“All these big shifts require huge investments in building hard and soft infrastructure – something that the government alone is in no position to bear. The Prime Minister has already talked about replacing publicly funded R&D in agriculture and rural infrastructure with a new private participation model. But the private sector will not step in till the larger environment itself is conducive for it to function smoothly. That is why a more favourable environment is being created – largely through an overhaul of several antiquated laws.”

Things did move after that. A few days back, an article in the Business Standard on mandis – High-tech mandis beckon India Inc talked about just the same approach envisaged by experts – a public-private partnership (PPP). 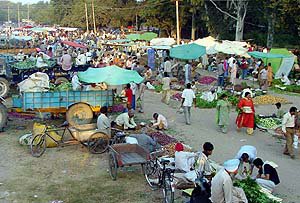 Organizations are partnering with the Indian government to develop terminal markets for agricultural commodities, or state-of-the-art mandis, that will provide farmers with a modern platform to sell their produce. These include Reliance Industries, the Tata group, ITC Agri, the Adanis, Larsen & Toubro, Pantaloon, DLF, the Rahejas and Lalit Suri’s Bharat Hotels.

Select projects at 8 locations to begin with – Nashik, Nagpur, Mumbai, Patna, Chandigarh, Rai (Haryana), Kolkata and Bhopal – would function as public-private partnerships. Costing over Rs 1,000 crore per setup, the private partner would hold 3/4th of the stakes. “These state-of-the-art mandis will become the link between farmers and the rest of the country, helping them get better rates without involving intermediaries”

As per plan, while the private partner will undertake construction, services, auction and warehousing, the Centre will be responsible for compliance and the state governments will have to chip in with fast clearances. Thus, both the systems would complement each other in their respective functions. In short, on one hand voids in direct public initiatives like Bureaucracy and corruption, Lack of technical efficiency and uncompetitive market structure would be taken care of private participation; on the other hand, risk management, scalability and approvals would be coordinated by the respective governments.

Looking ahead what needs to be done is integration of all these sub-systems and establishment of a centralized network across the nation. Entities like the e-choupal which serves as an electronic kiosk storing information regarding prices for agri-produce in various mandis of a particular region should be networked with these high-tech mandis for real-time quotes. Apart from these, other aspects of hard infrastructure like SCM, vehicle management, distribution resource planning need to be networked (source: Cargo New Asia) 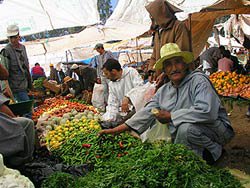 Unlike during the Green Revolution, the government won’t be the main driver of the change. Instead, government will be the enabler and the catalyst. A group of private companies, cooperatives, NGOs and farmers will learn to work together for their own self-interest to gradually revamp Indian agriculture.

Spot Markets and Future Exchanges
Apart from these, Spot Markets and Future Exchanges have been introduced in the rural markets as well. Two National spot markets, National Commodity and Derivatives Exchange (NCDEX) and Multi Commodity Exchange, have linked physical trading in mandis with traders, growers, warehouses, financial institutions and agricultural institutes. A farmer is able to find out weather data and real-time price of their produce, and accordingly decide to sell or store it for a future date. Thus, there is an element of dynamism emerging in the rural sector, which needs to be supplemented with the corresponding support functions. To ensure that the farmer has adequate facilities to store his crops, warehouses are emerging as a sustainable business proposition. Many private players have stepped in to invest, increasing total warehousing capacity to 300 lakh tonnes. 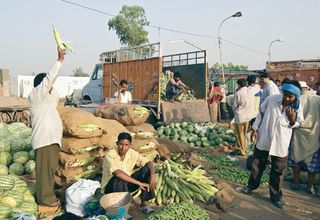 Direct Marketing
According to Agmarket, Direct marketing encourages farmers to undertake grading of farm produce at the farm gate and obviates the necessity to haul produce to regulated markets for sale. Direct marketing enables farmers and processors and other bulk buyers to economize on transportation costs and to considerably improve price realization.

Direct marketing by farmers to the consumers has been experimented in the country through Apni Mandis in Punjab and Haryana. The concept, with certain improvements has been popularized in Andhra Pradesh through Rythu Bazars and in Tamil Nadu as Uzhavar Santhaigal. Considering the vastness of the country, more and more such markets need to come up in the organized sector so that they can be developed in tune with the backward & forward linkages. The APMC Acts will also have to be amended to permit private and cooperative sectors to take up direct marketing of agricultural commodities from the producing areas and the farmers’ fields, without the necessity of going through licensed traders and regulated markets. Such a reform will spur private initiative in building consumer oriented market infrastructure in the country.

Moving up the Value Chain
If poverty elimination has to get a “realistic” status from its current “utopian” position, it is imperative to move to higher value work, be it any sector. So, whether it is value-added offshore work in the IT sector (moving from the cost-advantage tactics) according to Mckinsey, or it is farming, we have to move up the value chain in any case.

As the father of India’s green revolution M.S. Swaminathan says “High value agriculture is deeply important if you want to make any kind of meaningful dent on the poverty numbers of India.”

The government has started using local NGOs to ready farmers for horticulture. Capacity building is essential according to Mr Swaminathan. When Korea was moving into high value agriculture, it set up farmer schools and methodically trained half a million farmers every year. The Prime Minister said in a speech this year: “There is a problem as the move from a subsistence economy to an economy which uses more of commercial inputs and is dependent on selling its output in the market, risks are bound to increase. Hence, education and social security are quintessential elements that need to be factored in all policy decisions!

Thus, it is imperative to have perfect coordination between the private enterprises and the government and the respective entities should ensure that their efforts are in consistently in sync with each other. In the next two to three years, industry experts predict a much more mature market and established Rural hubs across the country, entailing profitable private sector units clubbed with regular cash flows and investments, leading to robust growth in “India’s greatest living industry” – Agriculture. Such efforts would definitely culminate into what is termed in the business cells as a “sustainable business advantage”!

Still stuck with the painted buffaloes? 😉