Uncategorized
Puru Gupta -
07:54
A few months back, I had mentioned a unique collection of cigarette packaging on Jim’s Burnt Offerings. That was the product side of the “Smoking” market. Let me talk about a new concept introduced in the service side of this market.

In Chicago, R. J. Reynolds, the 2nd largest tobacco company in the United States, has introduced a new premium-priced line of smokes called Marshall McGearty as an upscale smoking lounge in trendy market areas. Exclusively marketed at the lounge itself, the smokes are made out of fresh tobacco leaves and will be hand-rolled by a tobacconist. They are available in nine flavors and would be priced at $8 per pack.

Such a concept has redefined the cigarette market altogether, and if successful, it would follow the other niche market products offered at select retail outlets.

But how did this concept originate?
According to Adage,
Mr. McGearty (creative director of Gyro Worldwide, a Philadelphia advertising agency that has handled tobacco accounts) and RJR blend specialist Jerry Marshall struck up a conversation a few years back about tobacco leaves, likening them to the tastes of coffee beans or chocolates. They identified the emergence of a premium brand in each of the categories – coffee, beer, wine, liquor, chocolate and teas and identified a similar need amongst the adult smokers too. Thus, emerged the concept and the name.. Marshall McGearty! 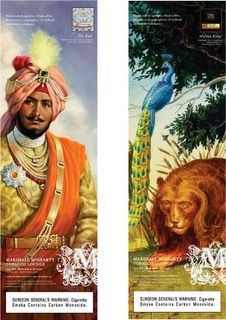 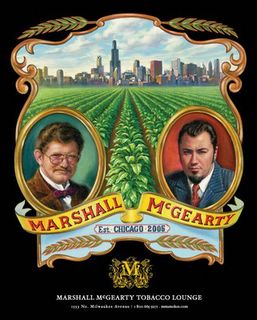 Tagging premium cigarettes as “works of art”, their objective was clear – to make some of the world’s best smokes and to build unique sanctuaries where their works of art could be properly enjoyed. This reflects in their advertising campaign too! 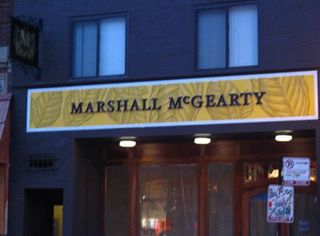 “A quasi-speakeasy for smokers, even non-smokers will appreciate this lounge’s calming atmosphere, along with its advanced air-filtration system that clears the air of any lingering smoke. After having your ID checked (the lounge is 21+), the staff will ask you what cigarettes you usually smoke. State your smoke of choice and you’ll be given a recommendation from the menu…” 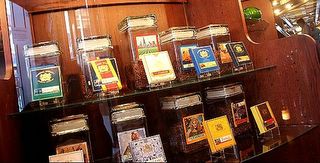 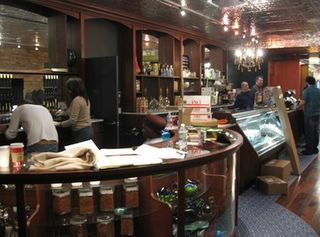 But wait a minute. Does the very mention of cigarette and smoking ring a bell somewhere in your mind? Yup… The moment you talk of smoking, you have a strong anti-social perspective associated with it to oppose the concept.
Marketing Cigarettes? Propagating smoking? What about the Law? What about Health? What about the society? What about our children?..
Here is the deal … Though a 1998 Master Settlement Agreement strictly bans smoking in bars and restaurants, Chicago’s ordinance excludes “retail tobacco stores,” places where 65 percent of the sales are of “tobacco” or “tobacco accessories,” according to the city’s Law Department. Marshall McGearty falls under this category. According to a release in Reveries.com RJR’s establishment is technically a “tobacco retail store,” where at least 65 percent of sales of are tobacco or tobacco accessories, making it exempt from the ban. (Many cities in the United States include similar exemptions in their smoking ordinances, including New York, where sales of tobacco at exempted stores must account for more than half of sales).

But that still leaves the question of the impact on the teens unanswered. While the focus seems to be on the core customers who drive revenue – existing smokers, there are fears that RJR’s plan could make its products appealing to teens, raising concerns over its intentions and setting up a new generation of consumers. Statistics confirm these apprehensions – research shows that 80% of smokers develop the habit before the age of 18.

Experts comment on the emulative tendencies of the teens– “the fact that it’s for adults only increases its attractiveness to adolescents, because the most effective marketing campaigns to kids are those that make cigarettes a part of looking like a successful, virulent young adult.”

Some steps have been taken to reduce such anticipated criticism. The website allows only visitors over 21 years, and the same restriction applies to the entry inside the Chicago lounge. Advertising mentions the warnings explicitly and so do the packages. However, this risk still cannot be completely eliminated.
Despite the restrictions of the Master Settlement Agreement, the Federal Trade Commission reported that the industry spent $15.15 billion on advertising, marketing, discounts and other promotions in 2003. After all, we are talking about an $87 billion industry and that too, only in the United States!

The market has a divided opinion on this nascent concept. According to New York Times,
Some experts say that with opening of such joints, cigarettes could start being treated like alcohol – the kind of thing you savor. On the other hand, others like Richard A. Daynard, a law professor, believe the idea will not work since their clientele is not high-end consumers, but mainly working class and poor people.

Where can one take this too?
One could develop this into a “cult” brand like iPods or one could look at servicing the luxury market, with a premium stake in the brand. Either ways, a niche market is what the advertisers are looking at. A strong opposition from the communities is highly likely, so is the work around it has jumped upon in the legal implications.

Whatever the case may be, the concept is definitely unique to begin with. What remains to be seen is the direction it takes in the years to come. Says an industry analyst, “They’re trying something completely different. They’re openly trying to create an allure. If it works, I can see the other companies lining up to try something like it.” For now, none of RJR’s rivals, which include Philip Morris and Lorillard, have opened smoking lounges or employed a glamour strategy.

Learnings for the sub-continent
Can this be a cue for the cigarette czar of the country? ITC could well reinvent the wheel and redefine the marketing of cigarettes in India. Keeping in mind the legalities, ITC could market some of its brands exclusively to the premium segment of adult smokers. Restrictions can be enforced to ensure that teenagers are not allowed entry at such joints, and the advertising is only done for adults. Though there are many constraints in making this idea practically feasible, I think a step towards this could be thought of and delved into, considering the “image building” exercises are not sustainable for the corporate giant….

Is this a summer intern speaking? 😉

[via Adage and subsequent Googling!]