Uncategorized
Puru Gupta -
18:28
You have thought of a brilliant idea and a cracker of a concept and you know it will make a difference! The problem is …who do you want the idea to reach? How will the idea reach? Will a radio jingle work or a billboard? A print campaign or a primetime television Ad? Would it be well taken by the consumer? How do you know if your idea has reached where it was intended to reach? Is there any integration of the multiple media sources reaching the consumers?….
Advertising is not just about out-of-the-box thinking, vague ideas and glossy prints. Though these elements are critical for any agency to get out of the clutter and shout, there is another element that is equally critical for any campaign to be successful – its Execution! It is imperative to give a firm structure and provide a strong foundation to leverage the thought process and translate it into feasible solutions and practical execution. One such agency that has laid out a firm structure that facilitates its media planning and provides a solid backbone to its planning is TBWA India with a concept cleped as “Connections“.

Giving an altogether different and a fresh perspective to idea delivery, “Connections” is a concept that orients the strategies delivered at all consumer touchpoints. The purpose of this model is to plan the execution of the idea at the generation step itself, rather than follow the traditional model of idea generation –> idea execution –> idea delivery!

It helps determine an optimal mix of the media at all pertinent consumer touch points, analyze the anticipated consumer behavior and evaluate the media to be used to reach those touch points that result in the most cost-effective, relevant and advantageous approach!

CONNECTIONS disrupts outdated conventions of media planning. The ‘who’ could be not just the end-user, but also management, staff, investors, media, governments or suppliers. CONNECTIONS also defines the ‘where’ and ‘when’ as anything and everything that exists between your brand and your audiences. Most importantly it seeks to measure the level of involvement of the prospect with the brand.
(Source: TBWA India “Connections”)

In its Connections Planning and Theory, TBWA provides the Admen with an assessment tool, called the Connections Wheel.
The connection wheel explicates the delivery of the idea based on an assessment and evaluation of the various available tools and sources of media. 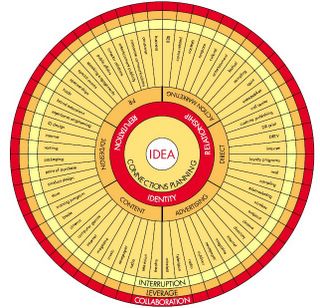 It represents all connections that communicate a brand’s reputation, relationship or identity to the consumer. As an assessment tool, the wheel enables us to see at a glance what activities a brand has undertaken.
(Source: TBWA India Connection Wheel)

An excellent tool for media planning and an exhaustive structure for sure!

By the way, do you know what does TBWA stand for?
According to Wikipedia,
TBWA was founded in 1970 in Paris, France, as a merger between Tragos American Management, Bonnange French Marketing, Wiesendanger Swiss Creation, and Ajroldi Italian Client Services.