Brand Stories
Puru Gupta -
13:00
In some countries McDonalds is considered to be the scapegoat for few xenophobic morons. But in the saner part of the world, Mcdonalds has become synonymous with the entire Fast-food Category. And what else can one say for a group which boasts of “30,000 restaurants in more than 119 countries, serving around 50 million people everyday” .
In India, Mcdonalds started their operations in 1996. It was also the first restaurant in the world not serving beef and pork on its menu. It recently won the “RETAILER OF THE YEAR AWARD, 2005” at Images Retail Awards 2005 hosted by IRF – India Retail Forum.

No. The purpose of this entry is not to talk about McDonald’s history but to highlight a particular trend that affirms its superiority in the Fast-food market – De-positioning!

Two particular Ads that have figured in the print media over time – Burger King and Krystal – target McDonald’s Ronald. In a way the Ads want to aver their supremacy in their market. And for that, they themselves have shown who the uncontested benchmark in their segment is! This is nothing but a way to ‘de-position the competitor’s brand from the mindset of the consumer!’
[Theory from the supreme P teaches this :-)]
The taglines read “These are dangerous times to be just another clown in the burger biz. Krystal is the small, square burger that packs a walop in the competitive world of fast food.” for Krystal and “it just tastes better” for Burger King. 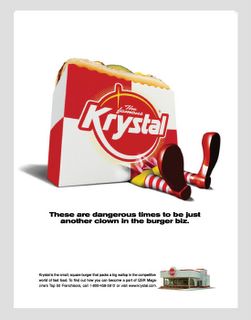 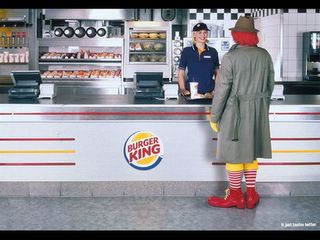 Not sure how much difference these Ads would have made on the sales of McDonalds’ Burgers. But yes, Mcdonalds does obviate any creative thinking for the competitor’s Ad Agencies! Thanks to Ronald, they don’t have to choose a theme or celebrity and spend on him/her.

By the way, the Ronald you see in the “Im lovin it” campaign is probably the 6th Ronald created for McDonald. According to Peaceaware.com

Ronald is a better looking Bozo, and successor to Speedee,

who was the mascot for McDonald till 1960 (that’s why he never came to India). Did you know that the yellow jumpsuit that Ronald wears now was pulled off a mannequin in a women’s clothing store!
Nostalgia central even mentions that the first McDonalds franchise had put the “golden arches” specifically designed to attract passing motorists. Interesting! Do the Franchisees in India, who have put their stores deep inside the markets know about this!

I really like their website and its presentation, but let me reserve my opinion for a later entry!