Panadol – One is Enough

Found an excellent Ad on Panadol, a well-known pain reliever.

“Panadol – One is Enough” 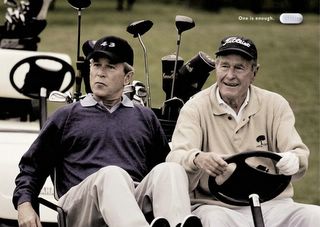 Not the product, but the Ad, is an instant eye-catcher. Absolutely hilarious, and very well connected with the tagline. The Bush Family probably does not enjoy a big fan club, which was substantiated by Fahrenheit 9/11, a year back. An indirect mock at them does send indicators to the International Community that we have had enough of him. Rather – them!
No wonder the tagline says “One is enough!” Beautifully associated indeed!

But there is a small risk in such politically affiliated campaigns. Does this mean that only the Democrats would be loyal to Panadol, and would not be appreciated much by the Republicans? Or would everyone take it in the right spirits, and take it sportingly?

Incidentally, discovered that this very Ad received a bronze at this year’s Cannes Festival in the print category 🙂 Choices do meet somewhere!

Panadol is one of the world’s leading paracetamol-based pain relievers. In India, it is called Crocin, a commonly known medicine for high temperature.

It is sold in more than 85 countries, including India, where it is called Crocin and Colombia where it is marketed as Dolex.

Could not write earlier, as have my semester examination going on. The worst thing about MBA is the Evil “exams”. But, one makes up for it, when you dont know anything 🙂 Just absolves you of all the tension and apprehensions, when you effortlessly screw up 🙂