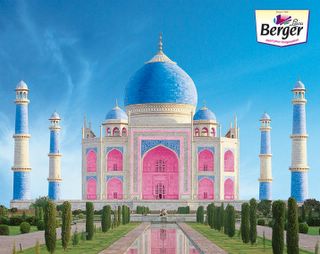 Looks familiar? Yup, it is Taj Mahal, our very own contribution to the “Wonders of the world“! And no, this is not yet another initiative of Mayawati on the Agra beauty, but a part of the latest campaign by Lewis Berger, renamed from Berger Paints.

This Ad reflects the extent to which one can imagine, and subsequently painting the imagination with colors. Thus, reinforcing the tagline.. “Paint your Imagination“.
Definitely, a colorful Taj Mahal gives a picturesque view, compared to the “Marbel-lous” original version. And why not? After all, it is the age of Remixes in India ;-). Why should Taj Mahal be left out?

Berger Paints has re-branded itself as Lewis Berger, named after the founder of Berger Paints. According to a press Release, the re-branding has been done keeping the festive season in mind, with the premium segment as their primary target.

The umbrella brand ‘Lewis Berger’ retains the respectability and equity gained by Berger over the years and signifies image enhancement for all the key products of the company.

This ‘imagination campaign’ has also been running as commercials on Television. The storyboard for the Ad is available at Agencyfaqs.com. It shows a painter recreate the Taj Mahal with her imagination. So what is new? How does this Ad reflect “premium quality” and “competitive advantage”? Probably, a cognitive association with Taj Mahal could symbolize quality, you never know!

A section of the Website talks about the color profiling and suggested combinations, as part of Home Beautification. A great insight, and a must see for informative purpose!
But, a more visible color combination and contrasts could have ensured higher customer attraction. Nonetheless, nice effort!

Just an observation – The website paints everything with a limited set of paints. Berger has used only a shade of Blue and Pink in their campaign through out. Are they de-selling the other colors, or is there a conscious decision to present limited shades to the customers?

For those who are looking for answers for the same,
Well, Don’t think too much about it; just …Paint your Imagination!