The Latest episode of “All about Ads” at NDTV Profit featured an interview with Gavin Heron, CEO and MD, TBWA, China.
Though he was interviewed on various aspects specific to the agency and the industry, but an interesting piece of the conversation included a comparison of the Indian Advertising Industry with the Chinese Advertising Industry. 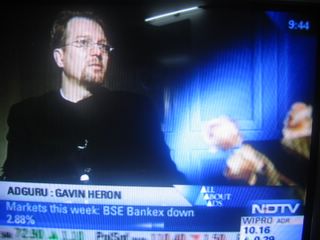 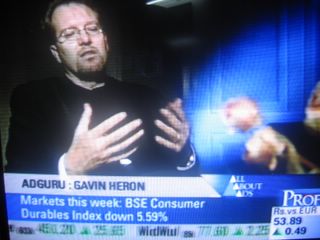 He emphasized on the following points –

1) Outdoor Advertising – Billboards in India promote offers and discounts, and are more oriented towards tactical marketing, whereas in China, it is more of Brand Building that is done, to ensure that the brand remains at the top of the consumers mind!

2) Rural Advertising – India has moved aggressively towards the Rural Sector, whereas China is yet to venture into that. Advertising is presently focused in the business zones, which includes Beijing, Shanghai and Guangzhou

3) Distinctive Style – Indian Advertising industry has matured and has developed a particular style of Advertising. In a press release by TBWA, Gavin opined that Indian Ads are creative and humorous. On the other hand, China has yet to have its own voice.

4) Another significant difference in the two industries was that – punning is possible in Indian languages, but the Chinese language does not lend itself to this; the advertising is more persuasive.

China, with such a huge market, has still not been able to create world class ads. There is not much we hear about Chinese Ads. Gavin accepted this fact, and explained that the reason was that the Advertisers were in a hurry to make Ads, as a result of which, the quality was being compromised. Though the media is controlled, there are about 800 channels in the country, leaving the consumer exposed to almost 800 commercials a week.

Gavin gave a good perspective on the trends in Advertising and the future outlook of the Chinese Advertising Agency, mentioned in the Press Release