Delhi is buzzed with the Hutch Half Marathon, which is due in less than a week from now. But, much before that Hutch has started milking the cow.
Saw this billboard from Hutch on my way back home to NOIDA! 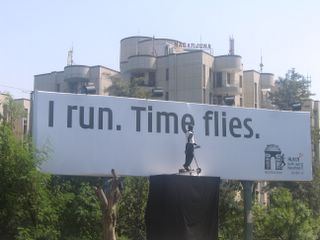 This is not a normal billboard, with an extra-large font size to enhance readability. There is a man, on a jogger, who keeps on running next to the hoarding. In the photograph above, it is not visible, since I took this photograph during the day. But, during peak hours, to ensure high visibility, and in turn, high recall, there is a big man jogging his way up, on the jogger!

Interesting concept! And the brain behind this creative is Oglivy! In an article in Exchange4media.com, Pratap Bose, President, Ogilvy Activation, commented on the origin and objective of the campaign, “Marathon is all about movement. We wanted to show an element of movement on a billboard. Hence, the idea originated.”
He continues to be enthusiastic – “One thing that really makes the campaign stand out is the fact that never before has a man been put on a billboard and shown moving. There have been men and models, but never someone running on it.”

This concept termed as “Out of Home Advertising” or OOH, has shown a large growth over the past one year. It is a Rs 5 bn Industry and contributes to almost 10% of the total advertising spends in the country. With other forms of Advertising cluttered up, and enjoying limited visibility, there is not much RoI Advertisers expect from TV, Radio or Print. Atleast, not as much as the Outdoor Advertising has to be offer.
Even in terms of cost, it is one of the cheapest media to advertise with close to Rs. 10-20 lakh per billboard (as mentioned in Domain-B), and gains enormous visibility, if executed correctly and carefully!

What has Hutch to gain? Yes, visibility for sure. But apart from that, a strong Brand Recall, a strong Brand Association, with the Marathon, and a strong CSR association with “Running for a cause” behind it, not to forget the strong affiliation with the premium segment, the core unstated target consumers of the “High Profile” Marathon! Why, else, would they call it the “World’s most Prestigious and Richest Half Marathong“?

Incidentally, a day after the campaign was launched, there were salesmen calling the Airtel customers (like me!) to find out about their preferences, and convincing them of the new offer! Must say, these people are in a LOT of hurry and want to run through the things as fast as they can… guess they have been inspired by the Marathon, right? 😉

Next time I see the Hutch Logo, I will first remember the guy jogging, and then, about the Connection! I hope people don’t enter the shop pretty soon, and start inquiring about the Joggers!

For now, the campaign does earn brownie points from the analysts, and kudos to the “out of box” thinking by O&M. Few more days to go for the mega branding event! 🙂

Keep your tummies tight, and the jogging shoes ready…