Uncategorized
Puru Gupta -
12:08
If you are in India, chances are that you would see a lot of hoardings today, and a lot of fanatics shouting slogans for Gandhiji, pretending to be his followers for life, and following his principles. Don’t worry, they are just celebrating a birthday.. In the list of Holidays given, it is called “Gandhi Jayanti” – 136th Birth Anniversary of Mahatma Gandhi
Incidentally, very few of them realize that they have become the brand ambassadors of a long-term marketing campaign for “Brand Gandhi”!
Every year, an attempt is made around this time by many companies to piggyback on this mega-marketing campaign. Most marketers intend to leverage the Brand Image garnered by the Legend, most of which he earned after his lifetime, elevating him to “celebrity” status and trying to cash in on the Recall value associated with him, by co-branding their brands with Brand Gandhi.
But does a simple cut-and-paste job like this always work? Can Mahatma Gandhi brand anything? Even if he can, does it always achieve the intended RoI? Unfortunately, the answer is a dejected NO. Such an effort not only diminishes the Brand Image, but also sometimes, could have legal implications, having high level of sentiments attached to him and his stature he achieved during his lifetime. Many People identify with his values and are reverent towards him. So, anything that goes against it faces a rut of resistance and is loathed by the public.

Having said this, what exactly, can we associate with him? What to Brand and what not to Brand with the “Gandhi” tag?

Before I delve into it, here is a beautiful piece of Advertisement, endorsed by Mahatma Gandhi. Of course, the adjective “beautiful” obviates its Indian origin 🙂
This one is from Italy, and advertises Telecom Italia.
This Ad featured in the EPICA Awards last year (yes, this was the link that triggerred the last post).
I got the link from Ad Saga, when I was searching for Brand Gandhi. Thanks Stephen! 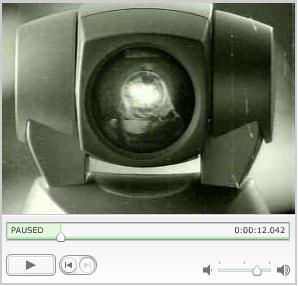 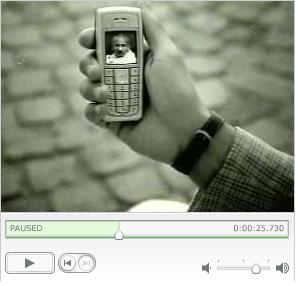 It shows Mahatma Gandhi delivering his speech from his room in India to the rest of the world. Difference?
He is speaking in front of a Web-cam, which is being aired live through different channels across the globe – on mobile phones, Desktops, Laptops, Large Screens; evoking sentiments and spreading this thoughts around, invoking an introspection among the audience…

The tagline reads …
“Imagine the World…If he could have communicated like this!”
Telecom Italia Communication is Life! 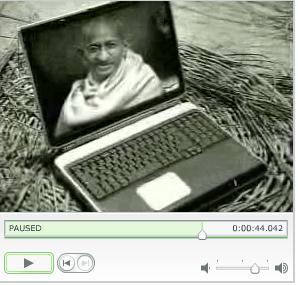 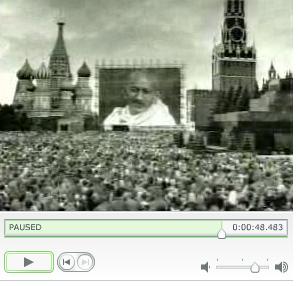 With a nice piece of Italian music in the background, and soft spoken utterances of Mahatma Gandhi, this Ad definitely made its mark in the “Communications Market”.
Great Job Y & R Italia!
Happy Birthday Gandhiji!
No Tag