Uncategorized
Puru Gupta -
23:11
She reached the 34th rank in the world, after losing to Maria Sherapova in the 4th round in the US Open last week. Though she might have lost the match, there is much more she earned from it – fans, respect, recognition, endorsements, and of course, money!

According to an article in Times of India, Sania has become the 2nd best pick for the advertisers for endorsements, and is now positioned with Rahul Dravid, just behind Sachin Tandulkar. The Endorsement Fee has increased to more than Rs 1.5 crore per endorsement per deal annually. On the other hand, Sachin Tendulkar, despite his bad form and injuries, commands Rs 6-7 crore per endorsement.
Preference Order for Advertisers –
– Sachin Tendulkar
– Sania Mirza and Rahul Dravid
– Narain Karthikeyan
– Virender Sehwag
– Sourav Ganguly

Though most of these names are of cricketers, Economic Times mentioned that Corporates have started to look beyond cricket. Attracting attention from Advertisers is often an arduous task, especially for single-member events, like Tennis and Chess.

This has been affirmed by a report in Yahoo Sports , which mentions that the income that Sania gets from Endorsements is relatively very less as compared to her cricket-counterparts. Apart from this, the kind of expenditure she has to make, is pretty different from what a cricketer would need to make –
Total Earnings till US Open – Rs 75 lakhs
Already Spent – Rs 44 lakhs.
“Unlike the cricketers, Sania has to spend not just on her travel – including that of a parent — but also on travelling coach John Farrington, who charges $5,000 per week. Add to it his business class air ticket and hotel expenses, it’s a tough life for Sania — if you see her as someone raking in the moolah.”

What is Brand Sania Mirza All about? 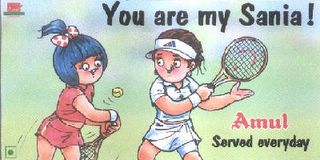 There are players, and there are good players. There are celebrities, and there are personalities. Where does Sania Mirza fit in? What Clicks with the advertisers, that has suddenly culminated in “Sania Mirza” across the entire nation, as well as, beyond that too.

– She is energetic and young, representing the majority of the consumers in the country, and so connects to a larger ‘proportion’ of the population
– She has emerged as an exception to the society, and is perceived as someone who can come out strongly against the odds! Being a Muslim girl, as well as promoting a non-cricket sport – none of these two tasks is easy, and she has executed them very well. One requires you to fight a cultural battle, with values and morals representing an entire value system; the other requires you to work harder to remain in public focus. This effort, in turn, would reflect on the Advertisers as well.

– She is attractive and so a higher potential to grab attention – a factor that edges her over Rathore and Kartikeyan in the Ad circuit.
– High Confidence and Aspirations – particular brand elements that connect the Gen Y consumers.
– According to Mid-day , “when you take Sania as a package — personality, youth, looks, confidence and game — she would do pretty well by ‘marketing’ standards”.
– Prafull Bidwai, in an article in rediff, avers that Sania “personifies the ‘New India‘ — someone with tremendous energy and self-confidence and the desire to achieve and excel.”
– There is a more realistic connect to sportspersons, since there is a measurable performance element attached to them, that adds objectivity, and in turn, credibility to their portfolio – ensuring a higher appeal as compared to actresses or models.

Apart from these, she would endorse the following brands –
# Sports Apparel, Lotto – endorsed for 3 years
# Sahara India – They have offered her to join them as a brand ambassador, but the exact relevance is still not clear to me.
# Malabar group – It has opened a new jewelry shop in Bangalore, called Malabar Gold. The showrooms, besides showcasing traditional jewellery collection in gold, platinum and diamonds, will also feature international brand names like Rado, Omega, Tissot and Longines
# HPCL’s Retail Brands – For 2 years, Sania would be endorsing the mega brands of HPCL like Club HP, Power, Power 93, TurboJet, HP Milcy, HP Racer, HP Champion and HP Gas in its portfolio for 2 years.
# She has been appointed ambassador of the ‘Save the Girl Child’ campaign of the ministry of health and family welfare. Remarkably, this is the first time that a Muslim woman has been assigned the role of raising gender awareness in a society which literally kills millions of female foetuses.
# Tata Indicom, as part of its effort to grow energetic brands and connect with the youth, plans to launch limited edition Signature Series handsets called Sania Fone with attractive features (Source: HinduBusinessline). Sania reflects these qualities and her association with Tata Indicom personifies brand identity.

Couldn’t find more as of now! Am sure the list would keep on increasing with time and with her progress, as she rises up the rankings!

Will continue this analysis with more on Celebrity Endorsements, and their impact!