It has been a long time since the last issue. I didn’t want to compromise on the questions, so did not post a few I had already in the kitty. Here is a fresh set of this week’s business dose. Should wet your appetite!

Earlier he was a salesman for Aga cookers, today his guidelines are “The Golden Rules” of a particular industry. Who is he?
(David Oglivy)

In which US city do you find Coca-Cola Museum?
(LasVegas)

Which company was co-founded by Jack Smith at Firepower systems, a US based software company?
(Hotmail, along with Sabeer Bhatia)

What does BMW stand for?
(It stands for Bayerische Motoren Werke, or Bavarian Motor Works)
More details are available at this link

Dr. Winston O Boogie is better known to the world as whom?
(John Lennon)

This company was originally called Badische anilin & Soda-fabrik. What is it better known as today?
(BASF)
It was founded in Mannheim, Germany, by jeweler Fredrick Englehorn, in 1861.

Vivek Paul was earlier associated with Wipro, from where he resigned with a few colleagues. Which firm would you associate with, now?
(Texas Pacific Group)
Recently, He was in the news when Raman Roy of Spectramind resigned. It is believed that both of them would venture into KPOs – including equity research, insurance processing, Market Research and Track records. Along with Raman Roy, the Head-HR of Spectramind, Raja Vardarajan, Sunil Rawal – Head-Quality and Upendra Singh – VP Operations also resigned. The resignations did not come as a surprise, since it was an anticipated move. The Primary reasons cited are
(a) the lock-in period of the equity they held in the organization ended on 30th June
(b) Redundant Functions were being streamlined
(c) Since it was an anticipated exit, a second line of leadership was being prepared alongside.

Which organization regulates any unlisted company in India?
(The Department of Company Affairs (DCA))

Air-India is venturing into Cargo Business after a gap of 9 years. It is starting with the lease of 175 tonnes of weekly belly space from a private operator on the India-Germany and Kerala-Gulf sector. What is the name of the operator?
(Falcon)

It is India’s first Aircraft Fractional Ownership Company, and has launched operations in the country with a fleet of 5 Cessna Business jets having a seating capacity of 7-8 passengers.
What is the name of the Company?
(Club One Air)
The corresponding press release can be found at this link
The Company plans to add 30 more jets by the end of 2006.
Fractional Ownership means different individuals would have complete ownership of the jets at different times, during which they would incur the operational and maintenance expenses of the aircraft, apart from one-time fixed charges.

In a recent survey conducted by CNBC Awaaz and ORG-MARG, the brand preferences of the consumers were taken in different Categories. Which Brand is Preferred in the “Readymade Garment” category?
(Lee)

In the same survey, which company figured as the Most preferred Brand as the “Employer”?
(Tata Group)

In its latest Marketing Campaign, this bank is offering Credit Cards for Life, with no annual charges at all. It would also stop charging its existing 35 Lakh customers, except the ones tied up with Air Deccan and King Fisher Airlines. The Purpose of this entire exercise is to increase the Market Penetration and get the consumers to spend. Which Bank is being referred to?
(ICICI Bank)
It outperformed Citibank in Jan’05 to become the number 1 Card Issuer in the country, and is the largest private sector Bank. Its next competitor, Citibank has a 27 lakh customer base. The Total Market of Credit Cards is of 1.4 Crore cards.
ICICI was the Preferred Brand in the survey mentioned above in the “Credit Cards”, “Housing Loan” and “Auto Loan” Categories.

DNA(Daily News and Analysis) is a new Daily Newspaper recently launched as joint venture between 2 giant Media Houses. Who are they?
(Zee and Dainik Bhaskar groups)

This one is simple. Which Company has the Ad Campaign as “Go On. Be a Tiger”
(Accenture)
Have a look at the Advertising Campaign
And further an insight into the Print Ads released so far
A nice Collection!

Yahoo INC is in discussions with acquiring a 35% stake in China’s second-largest e-commerce operator, Alibaba.com
Who is the largest operator?
(Baidu.com)

As for the P-Ad this week, there are 2 Ads. One of them is from my favorite – Amul, with Amir – The Taste of India :-). It is based on his latest movie – Mangal Pandey.
The other Ad is an International One by Pampers. Guess the Ad explains it all 🙂
Have a Look .. 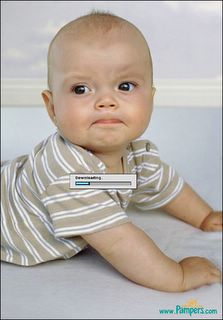 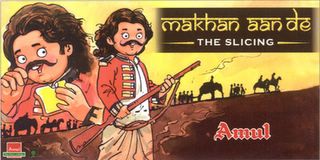